I’m filing my eleventh entry in the 100 Untimed Books challenge under prompt #85 – Coming of Age. I’m including two books as they’re on the same topic.

Persephone written by Sally Pomme Clayton and illustrated by Virginia Lee is a children’s book retelling the classical Greek myth in a more traditional way.  The second book, Persephone Under the Earth by Suzanne Banay Santo, is not really a children’s book, but is small (something like 20  pages) and a quick read as well.  It offers a slightly different, more empowered understanding of the story. It also incorporates images by Victorian artists Frederic Lord Leighton and William Adolphe Bourguereau, and it’s definitely a treasure. 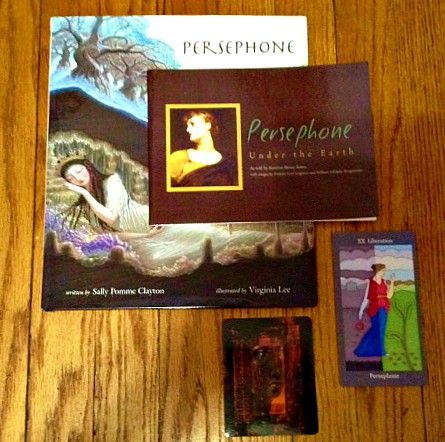 I have a strong connection with Persephone, but I’ve long understood the story as not a tale of victimhood as it is most commonly portrayed, but rather as a reflection of sovereign choice of a powerful female who becomes Queen of the Underworld.

In a curious turn of guidance about something I’m called to work more deeply with now – a connection to Gaia in her higher dimensional templates and my own access to Earth-held human templates – I’ve been invited to explore the Persephone story once again. Journeying with Persephone as Queen of the Underworld is one of the personal projects I’ll be devoting time and energy to over the next months as those of us in the northern hemisphere are called to begin our inward-turning work of the darker months. And so how appropriate and timely, as we begin October, that I’m starting to immerse myself in the Persephone energy once again. I can’t wait to see where this takes me and what I’ll discover about my own project focus. I’m also excited to begin a new journal – my field journal if you will – of this adventure. Likely I’ll be sharing glimpses of it over the upcoming weeks and stories, as clearly this immersion will be informing my thinking for a while. I always get excited when I sense a new overlay – a new lens to work with, don’t you?

I think I’ll be wearing this necklace a lot for a while, and when I’m not it’ll be residing on my Persephone altar. The pomegranate charm came from Greece, and the beads, my version of luminous pomegranate seeds are real treasures in themselves, vintage Japanese beads from the 40s. 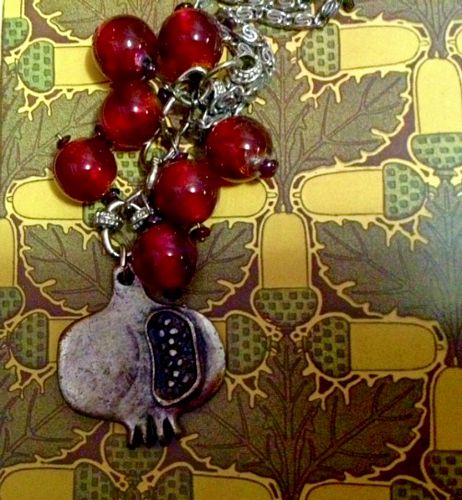 Another pomegranate treasure is this image from a cigarette card circa the 1920s. It’s from the series “Floral Beauties and the Language of Flowers” which was available packed in Duke cigarettes. 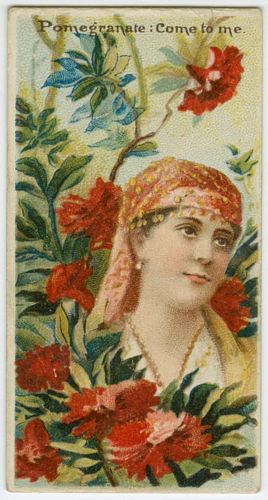 Which segues nicely into my usual book rating system, in which I use floriography to give a hint at the plot as well as my appraisal.

For Persephone I award a nosegay of Cinquefoil (maternal affection, beloved daughter), Wormwood (absence), and Hazel (reconciliation, peace), along with, of course, Pomegranate (come to me).

Persephone Under the Earth earns a tussy-mussy of White Oak (independence), Ash-leaved Trumpet flower (separation), Guelder Rose (winter, age), and French Willow (bravery and humanity), as well as Pomegranate (come to me).

Persephone stepping forward for me at this time feels like such a well-timed gift, not just because of the shifting seasons, but because this feels like such a big time of change collectively for all of us. In my own understanding of the Persephone tale, her time in the Underworld is, at first, deeply disorientating and distressing. She sees things that she can’t make sense of, she no longer knows who she is or how she fits in.  But she doesn’t stay in this state of loss and confusion; she wanders the corridors and becomes accustomed to the dark places. She fully integrates the Underworld space and makes it her own.  She accepts her place at her husband’s side, eating some pomegranate seeds, which commits her to spending part of every year in his presence. I choose to think of this as integrating the Divine Feminine and Divine Masculine, welcoming a new paradigm where we can work together in wholeness.

When she returns to her mother it is as a woman.

In her subsequent visits to the Underworld, she is very much a sovereign being, and she takes the role of guide for lost souls. She assists them as they experience what she has experienced earlier, and comforts and supports them as they become accustomed to the darkness and the loss.

To my way of thinking, we’re all called to do that. It’s part of our service to others while we’re here.  And really, isn’t that what Ram Dass reminds us when he says “We’re all just walking each other home”?

As we step into October what are being you being called to explore?  In what realm are you claiming your sovereignty?  Do tell – you know I love to hear.