Although it’s true I just recently posted another 100 Untimed Books review, it’s time for another as this one is a bit time-sensitive.

I’m filing this delightful children’s book, Days of the Blackbird: A Tale of Northern Italy by Tomie dePaola under prompt #94: Music. 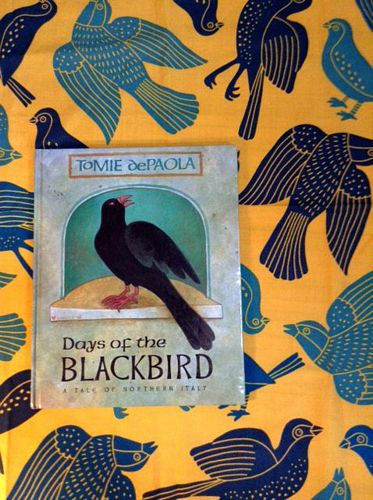 It’s a charming tale about a young girl and her father who spend time together in their courtyard listening to the colorful birds sing. They love them all, but have a favorite, a white bird that sings so sweetly. They are always a little bit sad when winter comes and the birds leave for warmer climes, but they look forward to their return in Spring.  One year though the father falls ill, and nothing seems to soothe him more than the song of their favorite bird.  And yet winter is coming, and one by one all the birds are leaving. The little girl begs the white bird to stay, and makes up a basket of wool for the bird to keep her warm. The bird does stay and sings each afternoon until nightfall to the gravely ill man, but the weather is bitterly cold in the mountains – the last days of January are SO frigid. The clever bird however finds she can nestle down in the chimney and keep warm.  On the last day of January, the sweet bird leaves the chimney to continue her singing duties, only when she shows up she’s now entirely black from her chimney stay. The little girl only recognizes her when she begins to sing.  The father gets better and in honor of the brave and devoted bird who henceforth remains black, they proclaim the last three days in January as the Days of the Blackbird.  And to this day, in the mountains of northern Italy this is how these last coldest days are January are still known.

In keeping with  my practice of awarding a rating based on floriography, the language of flowers, giving a hint at the plot as well as my appraisal, I offer a bouquet composed of a bundle of Reeds with their panicles meaning music; Crowfoot Aconite for luster; and Amaranth Cockscomb for affection.

I couldn’t resist photographing the book on a favorite bit of cloth.  With my currently renewed interest in textiles, I’m happy to show you this square I received, used in the traditional manner of a Japanese wrapping cloth, Furoshiki, to wrap a gift. It makes me smile each time I look at it.

If you know me, you know I love black birds, and hold the Crows and Ravens most dear.  So many of their stories involve tales of how white birds turned black, or how they once sang sweetly but something happened and now they have a harsh croaking sound. I love all the tales. If I ever had to limit myself to one genre of stories for the rest of time, I’d choose creation stories in a heart beat.

When my mother suffered a stroke one of the cognitive anomalies she experienced in the aftermath was a confusion about crows. She saw them as white. It’s such a strange thing – a discrete odd fact that somehow felt like a magical doorway for me in a time that held so many challenges and sadnesses and loses for her. In another one of those who-would-believe-it synchronicities, artist Quinn McDonald posted a piece of art she had done, entitled Black Sun, White Crow. I rushed to purchase it from her, and when we were arranging details, she mentioned a dream she had had when she created it. It was profoundly meaningful to me, and another layer of magic unfolded for me in my dances with both Crows and Ravens, but also with all non-traditionally white animals, who in some traditions are considered Spirit Animals. Over the last months, another white animal has shown up for me, and I look forward to deepening my exploration with her as well.

But back to Crow. I carved this stamp quite some time ago and have used it often. But I’ve never stamped it as a White Crow. I might just do that, as a kind of backwards honoring of The Days of the Blackbird.  After all, these long cold days of winter drive one to do the most unexpected things don’t they? 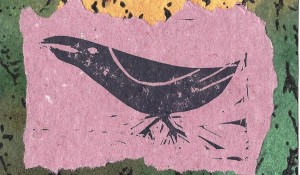 What about you?  Does the idea of these last days of January as Days of the Blackbird help ease some of the winter blues?  Are you dancing with and exploring new relationships with any animals this year? Have a favorite bird you wish would sing to you?  Do tell – you know I love to hear.