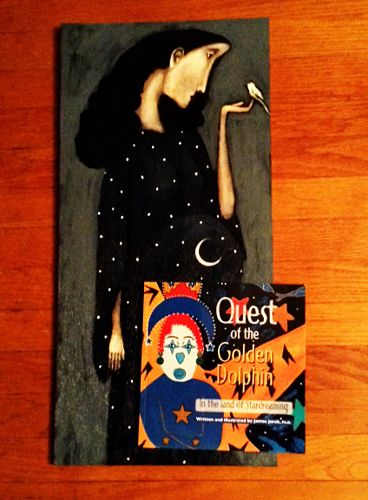 My next entry in the 100 Untimed Books challenge I’m filing under prompt #86: Alien.

Quest of the Golden Dolphin: In the Land of Stardreaming by James Jereb is a quirky little book that I’m finding hard to describe.

James Jereb, the book’s author and illustrator, is a visionary artist – both a self-taught painter and creator of environments.  On his land, which is called Stardreaming, he’s built 16 open-air temples and labyrinths, each with its own creation story and aligned to specific solar, lunar, or stellar connections.

So, in fact, the temples mentioned in the book’s story are physically represented as Temples of the Cosmos on Jereb’s land Stardreaming.  There is a map on his site where you can click on the name of the temple and see a photo of each here.

I actually think this is a lovely little introduction to spiritual principles that hold space for understanding that more of us is actually non-physical than physical, and that we are multi-dimensional beings and have access to that remembering.  And it might be especially delightful for those who recognize themselves as starseeds. There isn’t exactly a plethora of books for kids on the topic. In truth I think many kids understand that with great clarity than many adults on this planet at this time, so I think this may actually be aimed at planting some seeds for adults as much as for children.

It also doubles I imagine as a sort of simple introduction and invitation to explore the temples and labyrinths located on Stardreaming, and what sort of energy each holds.

I do have one warning about the book – almost every page contains both illustrations and writing, and all of it is done in mostly shades of gray with some black and white. There are some parts that are difficult to read because of lack of contrast, and if you find that kind of thing annoying this may not be a book worth checking out.

The photo I took is of the book is resting on a painting done by Terry Herb entitled “The Moon Child.” I was in the process of moving various pieces of art around the house as I often do, and as I passed the table where I had Jereb’s book sitting, I realized the background of white stars on the cover was a perfect match for the starry background of The Moon Child. A fun little synchronicity.  Alas, Terry Herb doesn’t seem to have a website, although a search on Google or Pinterest will turn up other examples of his work.

What have you been reading lately? Done any star dreaming? Keeping your eyes to the sky and watching La Luna grow into fullness? Do tell – you know I love to hear.