I’m filing my next entry in the 100 Untimed Books challenge under prompt #5 – Planets. 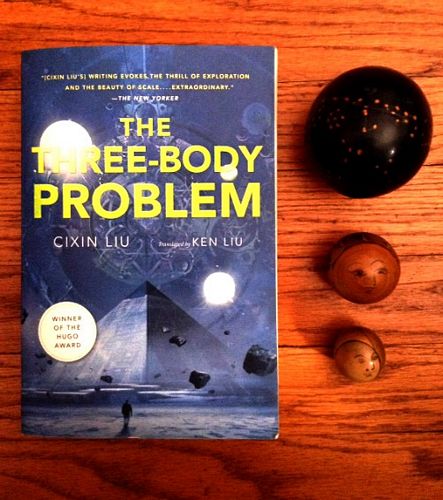 The Three-Body Problem is a remarkably complex science fiction novel by Chinese author Liu Cixin, covering a lot of ground both literally and figuratively.

The three-body problem refers to a long-standing problem in physics that attempts to calculate and predict the motion of three celestial bodies influencing each other with gravity. Okay that’s a crazy bad explanation, but as it relates to the story, there is a star system with three suns, and because their orbits are entirely unpredictable, the gravitational forces between the suns and planets is chaotic. So chaotic that eleven of the original planets in the system have been consumed by the suns, leaving only one left. The remaining planet exists under the harshest of conditions – sometimes it is extremely hot (too close to the suns) and sometimes extremely cold (too far away). The one thing they have going for them is that they can dehydrate and put themselves in storage until conditions get better. And in the meantime, the greatest minds of many generations are trying to figure out how to predict when there will be “stable” periods when life can flourish vs “chaotic periods when it’s impossible to tell what will be happening with the suns.

That’s actually only a part of the story, and happens to be the premise of a virtual reality game played in the novel. The rest of the novel focuses on in particular two Chinese scientists, one of whom has a complicated history connected to the Cultural Revolution.

Then there’s the part where first contact is made with an extraterrestrial race. Messages are exchanged, and it becomes clear the extraterrestrial race doesn’t hold warm fuzzy feelings towards Earth. Complicating matters, factions are formed, with some Earthers believing that things are so bad, having Earth conquered is the best solution.

All in all, I consider it a fascinating read and somehow oddly relevant to these times. I found the references to Cultural Revolution very interesting; the depiction of hidden agendas and shadow governments are pertinent; there are metaphysical and philosophical discussion galore; the virtual reality game is fascinating; and the scenario of first contact is compelling.  And while the book is definitely a stand alone read, it turns out it’s part of a trilogy so they’ll definitely be more reading along this line in my future. It might be my distant future though, as I’m trailing far behind on my reading plans for the year. I’m actually only clocking in at 50% of the goal I’ve set for myself. Hopefully summer will help shift that for me.

Using my floriography, language of flowers, rating system to provide a peek at the book’s themes, I’m awarding The Three-Body Problem a bouquet of Wolfsbane Aconite (misanthropy), Rosebay Rhododendron (danger, beware), and Pride of China (dissension).

What have you been reading? Have a summer reading plan? Do tell – you know I love to hear?