I’m filing my next entry in the 100 Untimed Books challenge  under prompt #59: Surrender Anyway.

It’s no secret that I love abecedariums and I don’t need an excuse to read them. So it’s no surprise A to Z of You and Me by James Hannah made it to my reading list. 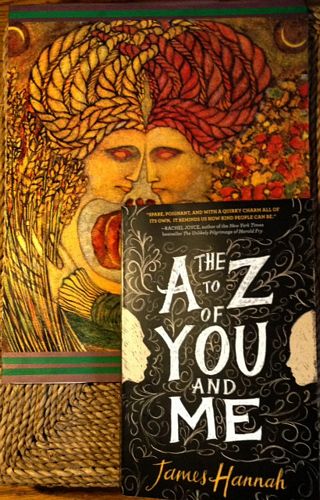 I’m guessing this novel won’t be everyone’s cup of tea though. The narrator, a man in his forties, is in hospice care, and we learn about his life primarily through a game one of his nurses encourages him to play as a way to keep his mind engaged. He’s asked to go through the alphabet, a letter at a time, choosing a body part and thinking of a story somehow related to it.  We learn about his childhood and then his adolescence and young adulthood where he made some regretted choices; and we learn about the loss of the love his life, and the estrangement from friends and family. We learn about those who make a difference to him while he’s in hospice and those he touches as well.  Admittedly the book sounds like it’s unbearably sad, but in truth it’s not. We get to see a life lived, and choices made, and how some things are complicated and in the end sometimes quite simple.

While I’ll rate the book on its own merits because I don’t think it should bear the burden of some other purpose, I freely admit I wish this book, and others of its genre were more widely read.

I feel very strongly that we as a society are so death phobic that the more conversations we can have, the more opportunities we have to explore what it means to walk through the journey both for the person dying and for those they are connected with – the better off we’d all be.  Imagine how helpful it would be, and what a different kind of society it would be, if we were all able to face our own fears around dying, and supports were available and in place for everyone so we could actually be present for the person dying. So that every dying person had someone to hold their hand and help them transition in ways that brought comfort to everyone involved. For I believe as Ram Dass has so poignantly said, “we’re all just walking each other home.”

I think it’s interesting that this week as I finished A to Z of You and Me, a couple of other things came to my attention regarding dying and grief, and how we might open to dealing with them more openly.

First is a TED talk by Lucy Kalanithi on “What Makes Life Worth Living in the Face of Death.”  She’s the widow of neurosurgeon Paul Kalanithi whose best-selling memoir When Breath Becomes Air was published posthumously in 2016.  It’s a poignant courageous talk. It was filmed late last year so perhaps you’ve already seen it, but if not, I encourage you to take 15 minutes and watch. Let’s never forget we have choices, and perhaps you’ll also be inspired to work towards making sure these kinds of conversations happen and end-of-life rights and options are increased rather than diminished.

On a more cheery note I invite you to check out a brief video talk about Hawthorn – “Tree of the Otherworld” by Asia Suler. Asia is one of my favorite herbalists/alchemists/teachers who is the force behind One Willow Apothecaries.  Hawthorn is known as a liminal tree, with many magical associations, but is often used in connection with grief.

Have you read any abecedariums you want to recommend? Something you might tag as “surrender anyway”?  Think midwifing people as they transition out of this life is as important as midwifing them into it? Do tell – you know I’d love to hear.

Categories : Body, Spirit
Tags : 100 Untimed Books, Asia Suler, floriography, Lucy Kalanithi, Ram Dass, The A to Z of You and Me