You are here: Home » Assessing Treasures

I was paging through an old journal today and happened upon a page where I had written this, taken from a source I had neglected to note (and alas, can’t now seem to track down):

“from the obituary of Berthold Wolpe:

‘…one of his most treasured possessions was a miniature sweet pea with pale green leaves and tiny sky blue flowers.  The seed it came from was the grandchild of a seed that had been found in a tomb of one of the Pharaohs.’

It’s a bit ironic I came across this today, because last night I was having a discussion with friends about treasures.  These friends, themselves, are treasures to me – for many years we took turns meeting monthly at one another’s homes, spending long hours sharing meals and conversations in our own private rendition of a liberal think tank dreaming up solutions.  Then various cross-country moves and illnesses weaned us away from regular meetings and now we gather perhaps once or twice a year as we can manage.

Last night someone mentioned having been at a large dinner party of relative strangers where everyone, both adult and child, had been asked what they would take with them that fit in a backpack they could carry if they needed to leave their home and didn’t believe they could ever return.  My friend found the answers offered to be quite fascinating, which I imagine is likely always true with such a question.  People are so different in what they value and consider important.

I was surprised though to discover I couldn’t really come up with an answer for myself.  It’s not that I don’t treasure things – and after all, it’s my intention to live a life where I’m surrounded only by treasures.  So clearly they’re important to me.  But what would I take?

I think it’s not uncommon that people would say photos, but I don’t think I would.  I think I’ve decided all the important memories live in the heart, and photos just aren’t necessary as a permanent reminder.  Then I thought perhaps I’d take a small physical object of people.  I have a few pieces of jewelry – something that belonged to my grandmother, something to mother, something to sister, you get the idea.  But as I thought about it, it just didn’t seem important.

And so I’ve been sitting with all that and being curious about it.  I’m pretty sure I’m probably not going to evolve into a minimalist, but it does seem as though my relationship with things is changing.  What’s important in the current now moment, I’m holding much more loosely with regard to its possible importance in the future.  And I’m suspecting that’s a really good thing because it’s helping me stay current and not project much energy and attachment into the future.

But having said that, I think I’m more committed to celebrating the treasures I am enjoying now.  Here’s a peek at one of necklaces I treasure. 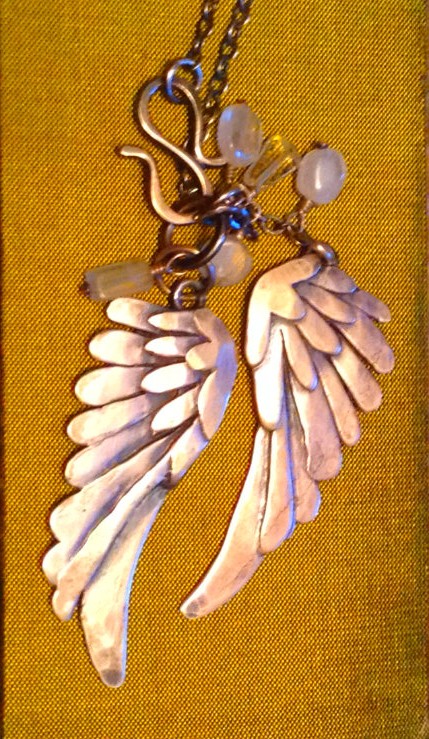 What about you?  Do you know what you’d want to take with in your backpack?  What treasures are you surrounding yourself with?  Do tell – you know I love to hear.