Equinox greetings!  The seasonal wheel has turned again, officially in the early hours of 2:20 a.m. here in my time zone.

Equinox is a time of balance.  And Autumn sets loose the forces of transformation.

I love this image created by Basho:

in the garden a worn-out sandal

I like to mark the yearly rhythm by doing seasonal mailings, and to celebrate this autumn I sent out cards with ginkgo leaves.  I love ginkgos.

Ginkgos are living fossils – there are fossil specimens that date from 270 million years ago.  They were long revered in China as sacred trees, symbolizing sacred life force and longevity, as well as representing the concept of duality as in yin/yang.

Gingkos were also revered by the Japanese and were often planted at temples.  And now they’ve become known as symbols of both hope and peace.  In an extraordinary display of tenacity, four gingko trees were the only things that survived in the epicenter of the atomic blast that devastated Hiroshima.

Hope is such a beautiful blessing, and I’m liking caring that energy into autumn.

It always amuses and confuses me that the spelling isn’t standardized – is it ginkgo or gingko?  The correct scientific name is Ginkgo, but it’s amusing to know that it’s likely the result of a spelling error that occurred three hundred years ago.

I created this piece with ginkgo leaves some time ago, but it caught my attention again.  And it seems like another thoughtful energy to carry into this autumn as well. 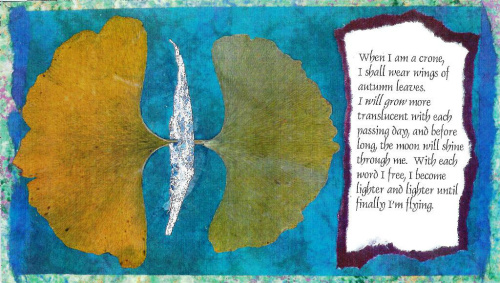 I’m wishing us all a wonder-filled and free autumn.  (Or Spring for our southern hemisphere friends!)

What about you?  Are you celebrating the equinox?  Have you thought about how you’d like to step into this new season?  Do tell – you know I love to hear.