You are here: Home » Birds of Peace

Each year since 1981 September 21 has been celebrated as International Day of Peace.

We have such a great way to go to establish meaningful peace, and yet we can’t allow ourselves to be discouraged, or stop looking for ways to reflect peace in our individual lives.

I often think about these words of Hafiz:

“I have come into this world to see this:

the sword drop from men’s hands

even at the height of their arc of rage

because we have finally realized

there is just one flesh

How is it we don’t all know this?

In one of those strange synchronicities, today I was going through some things in my office, and I came across a postcard stuck in a book. 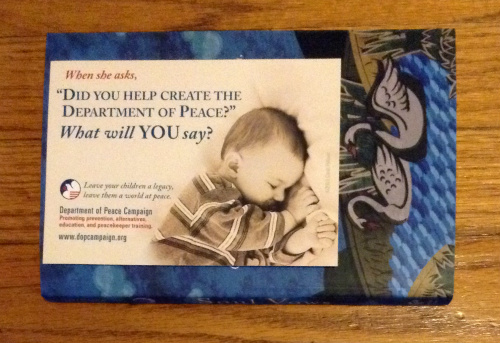 I’m not entirely sure when it’s from, but it was early on in the campaign introduced by Dennis Kucinich to establish a Department of Peace, so perhaps 2001.  Of course that campaign was unsuccessful, just as every previous campaign since the first in 1793.  That’s not a typo – the first Peace Office was proposed by a signer of our Declaration of Independence.

There is currently a bill before the U.S. House of Representatives to establish a Department of Peacebuiding.  You can read more about it on the Peace Alliance website here.

I like to think of my home as a peace zone.  Years ago I read about the Kalao bird which is revered by the Senufo people of Cote d’Ivoire.  It’s considered a sign of peace and good fortune if one is spotted, since they are shy birds and avoid humans.  I found a carving of one by a West African artist and it now stands in the hallway of my home. 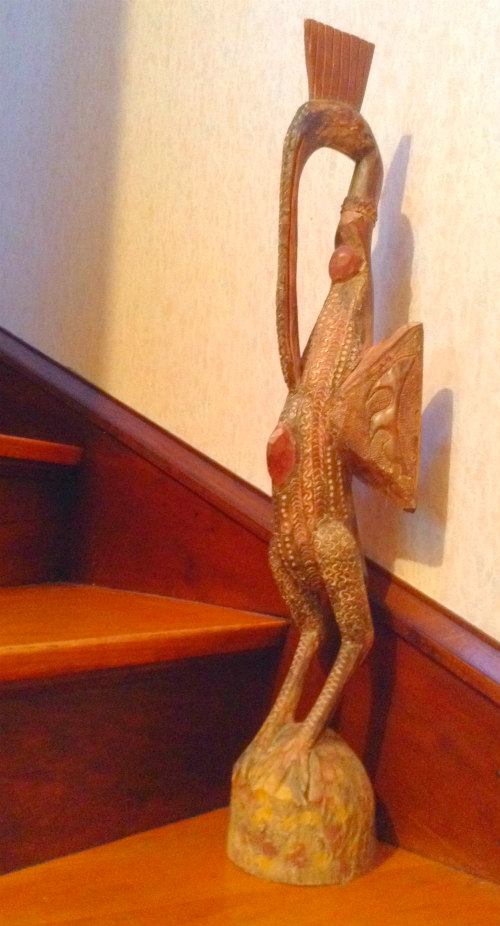 Wishing you a day filled with peace, and every day following as well.