You are here: Home » Blottesque 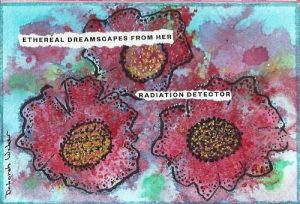 I love how the universe often seems to plop down the right word for my discovery.  This week it’s blottesque, which is defined as “characterized by blots or heavy touches; coarsely depicted; wanting in delineation.”  And wouldn’t you know it, this week I’m all about the blobs, the blots, the stains, the drips, the magic.

When I was a kid I remember spending an entire summer trying to master writing with a cartridge fountain pen.  All I managed to master was having a permanently stained middle finger.  The other night I had a fabulous dream in which I was busily scribing and working on illuminated manuscripts.  I was having so much fun in the dream, it occurred to me I ought to pinch myself to see if I was dreaming (don’t you love the irony of dream think?!). And when I reached over to pinch myself I noticed my fingers were covered in fabulous ink blots.  I never did pinch myself because I got lost in trying to decipher the images.  I kept thinking how fascinating it was that I not only had unique fingerprints but also unique ink blots.  And then alas I woke up only to find my hands were back to their normal pristinely unmarked state.

But inspiration was planted and splotches of color abound waiting to be noticed.

This past weekend was Chicago’s color run – and while I wasn’t there – I did soak up all the fabulous photos.  Now if only I could figure out how to have such a color intense experience without actually having to brave the crowd of thousands.  But I guess that’s what dreams are for – and photos.  You can get an idea of the joy from this little promo video.

What was I doing instead?  Well, ironically (or is that synchronistically?) I was watching The Blob – that oh-so-awful-it’s-classic 1958 sci-fi in which Steve McQueen made his starring debut.  There’s something about vintage sci-fi films that intrigue me – I’m always curious about how we culturally imagined the future would look like, and also I’m always amazed at how limiting actual life was. There are never any women scientists; at best they are daughters and wives of scientists and skilled at clerical work but the underlying premise is always they are “girls” and need protecting.  I’m glad it’s laughable from this point on the calendar.

This week I was also introduced to the INKS app which combines the fine art of pinball and paint, and created my first blobby/blotty/inskstain masterpiece. 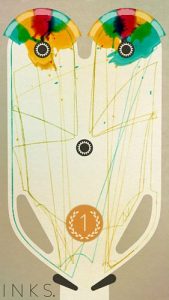 I also created a series of watercolor blobby/blot poscards, and when they were dry I inked in some lines and created some fantastical creatures and then glued random words on for a found poetry experience.  I mailed them off as part of a challenge, so I won’t post photos until they’re received.  But here’s one card I’ve blobbed without adding the drawings or words. I’ll get around to that later and then this will be my keeper. 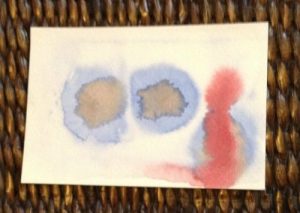 Mandy Steward of Messy Canvas puts out a monthly zine called Secret Message Society.  Of course you know I’m in on that – secret messages, secret societies, zines!!!  Each month she includes a little 2×2 inch printed secret message in every zine, and then randomly selects one of the subscribers to receive the original 4×4 piece from which the copies were made.  I was the lucky recipient of the original this month.  And you can see why it’s a perfect fit for this blottesque exposé of my week.  I actually already have the original tucked into one of my journals, so this is the smaller copy that was enclosed in all the zines.  I photographed it on the zine itself – don’t you love a good scarab?!  And the message is one of my favorite mantras “I create the world I want.” 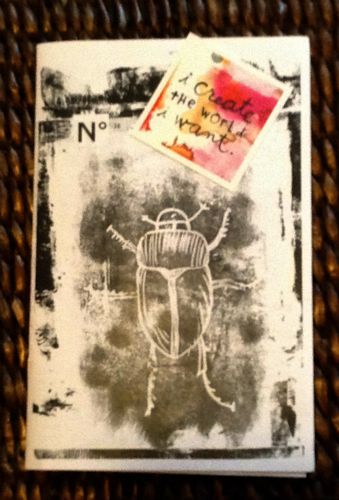 And finally, can a week with all manner of blots and blobs really not include some actual inkblot talk?  I don’t think so.  So let me introduce you to Klexographie – the online inkblot oracle.  I was truly amazed to find out that Psychologist Hermann Rorshach developed his well-known inkblot test based on a popular parlor game Europe –  Klexographie.

Oh, one more thing – I’d be remiss if I didn’t mention the wonderful Interactive Intuitive Readings my very gifted friend Terry Lee Getz offers.  You can check it out here, but I have to say I love the reading she did for me.  Quite magical.

So there you have it – my blotter on blots and the blottesque happenings in my life.  What about you?  Any blobs to report?  Ink stains to remark upon?  Blots on your record that you’d care to reveal?  Secret messages to share?  Do tell – you know I love to hear.