November is marching on, but I want to take one more look over my shoulder at the departed October. I haven’t played regularly this year in Julie Kirk’s My Month in Numbers challenge, but I always mean to.  October in particular felt like a peculiar month in a year that’s felt odd.  I’ve been talking to friends about how in this year more than anything I feel untied – as though things have changed at some fundamental level but that I’ve somehow lost the topographical map and spatial coordinates of where I once was, so I can’t actually tell how far I’ve come to the point where I’m at now.  In truth that’s a rather existential navel-gazing thing to contemplate and yet I’ve had that sense all year.  Which is why I’ve especially found it helpful and fun to do my weekly peeks into my week via the Scattered Life Collective invitation and why Julie’s Month in Numbers invitation feels so perfect.  Tiny little anchors that remind me of what’s been going on a concrete way.

I have always loved the nursery rhyme Sing a Song of Sixpence because of the tin pie I had as a child that popped up black birds when the handle was cranked.  Those black birds were in my mind crows, and you know how I love crows.  The lyrics of the rhyme narrate the story of how “the king was in his counting house counting out his money; the queen was in the parlor eating bread and honey.”   And because I like to combine things and integrate them in ways that delight me, I like thinking of myself as both king and queen.  I like counting and I like honey.  And so I’m putting on my crown as queen and heading out to the counting house to count up some of the things the month of October brought to me.  And by the way, “month of October” just happens anagrams into “Comb Throne Foot” which I think is a perfect tie in to my royalty inspired metaphor.

Books Read: 11   I suspect that sounds like a lot, as though all I actually have time for is reading (and perhaps popping bonbons in my mouth while lounging on a divan).  And although I’d probably rather enjoy that – at least for a while – the truth is my total includes a number of children’s books.  There’s always room in my reading list and in my heart for a good children’s book.  Finding The Little Prince as a fabulous popup book was a major treat, and I scored a major coup finding a copy of the oh-so-adorable vintage book Helpful Mr. Bear.   While not a children’s book, my favorite tome of the month was Kate T Williamson’s A Year in Japan, which is a lovely little collection of observations of her everyday life for the year she spent in Japan.  And it’s filled with glorious illustrations. 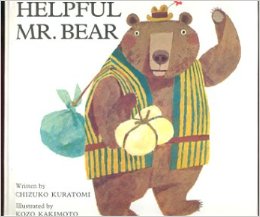 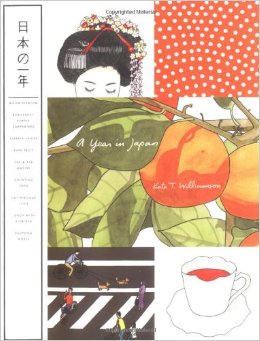 Classes: 12   I laughingly started October by declaring I would be focusing on loveifying my biz by taking a number of online biz-focused courses, in addition to the art and spiritual coursework I’m involved with.  With the couple of year-long programs I’m participating in, and a few short-but-sweet classes, at one point in the month I was participating in 12 learning experiences.  I put my head down, narrowed my vision, and pretended I was repeating my graduate school experience.  Intense but fun.

Oracle Cards Made – 36  For the Inner Alchemy Earth deck. 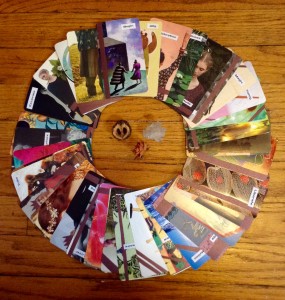 Fabulous Words: 4+  I’ve started the practice of including a favorite word of the week in my blog posts, so the official count is four.  But I also included one in my annual Pumpkin Girl Halloween post card that I send out to friends, so that makes five.  Of course I’ve been swooning over a number of other foreign words that delight me, so the true count is probably countless.  For example: the Greenlandic word eqismaarput means “we walk arm in arm as lovers.”  That’s a pretty magical word to know isn’t it?

Eclipses: 2  We had the lunar eclipse early in the month which I stayed up til the wee hours and got to see.  The partial solar eclipse I wasn’t so lucky – we were thoroughly clouded over.  But I was prepared with my eclipse glasses.  No eyes were damaged in the taking of this selfie. 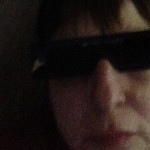 Pumpkins: 3   Well I suppose being truthful the count is really one – the small orange pie pumpkin.  The other “pumpkin” is likely some kind of gourd, but technically not a pumpkin.  It was too fabulously creepy looking though not to use as my porch crow-supporting Halloween decoration.  And I really do love my peculiar-looking paper mache pumpkin, so I’m counting him too. 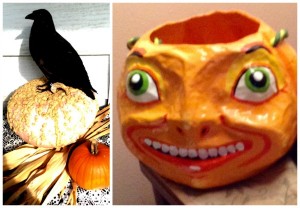 Trick-or-Treaters: 51   We had extraordinarily unwelcoming weather ushering in the trick-or-treating extravaganza this year.  Record-breaking blustery winds first brought in sleet and then early-season snow making travelling a bit risky for all but the hardiest goblins and ghouls.  So our count of visitors was way down this year.  Those braving the elements got extra candy for their efforts, but I have to say there were plenty of leftovers and I’m doing my part to insure they don’t get stale.

The Blacklist episodes watcbed: 22 episodes of the first season.  I LOVE this series, and James Spader in a hat simply delights me.

Small appliances needing replacement: 2   My vacuum cleaner gave up the ghost as did the DVD player.  As I replaced the DVD player I wondered how much longer this technology will be around.

Panic attacks: 1    I’m very grateful that I don’t suffer frequent panic attacks, but I had a scare this month that tossed me into one full depth.

Animals offering messages: 8   I happen to believe we live in a beautiful oracular world – and that there are messages around us always.   In addition to my totem animal allies, I pay attention when messages come forward from other animals as well.  In October I danced with crow, bear, spider, sphinx, geese, fox, mouse and monarch butterfly.

Leaves raked:  7.3 gazillion (actual count).   The neighbors on each side of us have Honey Locust trees and while the leaves are lovely and when falling look like little flakes of golden snow, they do pile up.  I’ve tried speaking to the wind and requesting she blow them away, but she only laughs at me.  And now that they’ve been snowed on and frozen I suspect the next raking adventure won’t be all the easy either.   On the other hand last year while raking I uncovered 3 treasures – a lost earring, a fabulous rubber spider ring someone must have lost while trick-or-treating, and a scrap of torn notebook paper with a cryptic note on it.  Quite a fabulous haul.

And there you have it, my October counted.  What about you – care to summarize your month?  Perhaps a word or a phrase, a particular memory, a trick or a treat?  Do tell – you know I love to hear.