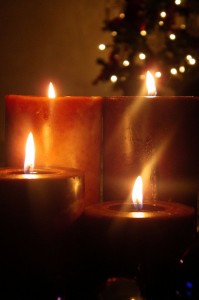 One of the things I like doing to close out the old year is a burning bowl ritual.  And while I do it every year, this year with the Full Blue Moon and Eclipse, it feels like an especially potent time for releasing things and honoring culminations.  So later this evening I’ll be burning in ceremony strips of paper written with what I wish to release.

Now that I’ve spent the last several days reviewing my 2009, there’s one other tangible thing I enjoy doing as a way to close the door.  I make something that represents the year for me.  Sometimes it’s a small book, or a tiny painting; once it was a necklace on which I hung charms and beads representing meaningful parts.

This year was so much about establishing my business and finally feeling strongly rooted enough to openly share widely what I do.   And so today I made a talisman reminding me of that.  I have an extraordinary seed/nut which I have totally been unable to identify despite much research.  But it looks like it has a wonderful network of roots painted on it.  I attached some leafing shoots to it representing the things I’ve grown this year, and included a message and a couple of other reminders.  And I’ll keep this on my altar as a way to honor those 365 days of my life.   I love the idea of concrete markers of my herstory.  Although I haven’t taken a decent picture yet, when I do I’ll post it.

I wish you ease and grace in releasing what is finished; joy in welcoming the new; and much happiness fashioning whatever you choose for 2010.  May we all be brightly blessed!