You are here: Home » A Favorite Teaching Story 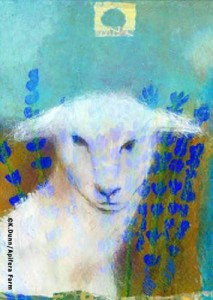 I’m delighted to have permission from one of my favorite artists, Katherine Dunn, to post the above picture of her wonderful archival print Young Sheep in Lavender.   Katherine is an extraordinary woman – a brilliant artist; a lavender farmer who caretakes an amazing crew of beloved animals; and a visionary involved in some wonderful projects that nurture and bless both human and animal friends.  I encourage you to check out her art and her blog (linked above in the credit line) – you will be charmed and inspired.

I was blessed with another lovely unexpected gift also.  Some time ago I wrote a note to the poet Morton Marcus.  A bit of a fan letter I suppose, but it was an honest reflection of my feelings about one of his poems.  I adore poetry and I have a special fondness for prose poetry, and I believe Mr. Marcus is the finest prose poet writing. Period.

Sometimes poems fit in your heart perfectly – and fill a spot you hadn’t realized was empty until you discover the treasure slipped in there.  For me that’s what art is.  It both shifts you and makes you more whole.

One of his poems Gravity (published in his collection When People Could Fly) is just such a treasure for me.  And he very graciously granted me permission to post it on my blog.  I’m so delighted and grateful for his generosity and kindness!

It feels like a particularly perfect poem to mark the new year, as so many of us are seeming to struggle to find our footing as things change in our personal and collective landscapes.

I think of this poem as one as a remarkable and beautiful teaching/medicine story.  So I invite you to grab a cup of tea and enjoy – this is a long one.    And do let me know what you think.

Once people laughed all the time.  That was long ago, when the earth was nothing but nailed together layers of rock littered with the broken dishes God’s mother had thrown from the windows of her new house.  In those days there existed a breed of sheep whose hooves were like the claws on hammers.  Wherever these sheep stepped, they pulled up the nails that held the earth together, and stones and boulders would float up behind them, and the planet sway.

When adults or children saw a rock drifting toward the sky, they would lunge for it, wrestle it into the crevice it had some from, and holding it there with one hand, they would yank from their cummerbunds the nails and hammer they always carried, and pound the rock into place.

Constantly looking for such floating material, manufacturing nails and hammers, and tending the sheep were the principal occupations in those days.

Still, the people laughed all the time and loved the hammer-clawed sheep.  They used the sheep’s wool for clothing, blankets and the walls of their tents, and reluctantly ate the sheep for food, reasoning that everything had its drawbacks, whatever they might be. Take the crockery-strewn landscape: the people would have been overjoyed for one or two trees.

The people prized the sheep for their loving dispositions.  Even wild ones would wander up and nuzzle a group of humans sitting around a campfire, many times settling down next to them when one of the old shepherds told the story of how God, after he had made good, built the new house for his mother, or how the stars were lanterns belonging to a restless tribe of wonderers who had wandered into the sky, taking all the light with them, which, by agreement with the tribes who remained behind, they used in their lanterns only half the day.

The stories served as reminders of how all things were connected, and made the people, chuckling respectfully, cherish the sheep all the more.

And then there were the sheep’s voices, so soft and mild they soothed the listeners’ most distressing thoughts, relaxing their muscles, and making their smiles widen.

But life was too hard: the scraggly bushes and dusty cabbages, the children cutting themselves on the broken dishes or twisting their ankles as they ran after the floating rocks — things had to change.

And so the prayers began, and the older shepherds were soon making deals with angels while everyone slept, until one day the people woke to find the sheep gone, the rocks in place, the dishes swept up, and very little to smile about.

Within a day, there were patches of greenery; and a week later, slender saplings; and before the month was out, wooly green trees with singing birds inside them, which everyone agreed wasn’t the same as the voices of the sheep or their nuzzling presence.  But the elders halted all criticism by insisting that “under the circumstances” this was the best deal they could get.

Most trying of all, especially to the children, was the attitude of the rocks.  Not only did they no longer float about; they burrowed into the soil as if they had turned away from the sunlight and yearned to be underground.  This made the people sadder than they already were, and a delegation went to the older shepherds to complain.

“This is what you wanted us to do,” the elders replied.  “Soon there will be flowers and gardens, vegetables and fruits.  But the laughter is gone forever.  We traded it for gravity which keeps the rocks in place but also keeps you from laughing.  It was one or the other.  You could have remained connected and had nothing, or become separate and have the fruits of the earth.  Thus you have chosen.  Thus it shall be.”

The people turned back to their tents with tears in their eyes, even as the grass spread far and wide over the rocks and the red and yellow flowers unfurled everywhere in the landscape.

And God saw that it was not good and took pity on his people, and came to the eldest shepherd in a dream. “Behold, I am not a cruel god,” he said.  “Look at the new house I built for my mother.  Let my people know that I will allow them to break their gravity with laughter and singing from time to time, and although the sheep will not return, I will simulate their voices in everyone’s heart through the words of certain men and women, henceforth to be known as poets, so my people should not always be sad but at the same time should never forget what they, through their own folly, have lost.”

(reprinted with author’s permission; please honor and respect the copyright)