I had an amusing dream last night. Well actually what I remember is the briefest fragment – a snippet of conversation and an image. But it made me laugh and hence is my inspiration for today.

In my dream I’m on a panel and we’re discussing the importance of birthdays, culturally and personally, both in the present and the past.  One person was talking about “transitional” birthdays and wanted to know when someone was considered an important elder in their community. And at that moment, a person dressed as a big dark blue berry came on-stage and began tap dancing.

My dreams love speaking in riddles and puns, and it took me only a second upon waking to realize what this berry was.

The Elder tree/shrub is revered by many cultures, and has long been used medicinally and magically. Both the flowers and berries are used, and the berries in particular are often made into a syrup that is considered a powerful immune stimulant.  It’s a wonderful thing to have on hand during the cold/flu season.  But they’re delicious year round made into jams. Traditionally the wood, when harvested respectfully (some pagan traditions hold that Elder Mother is both powerful and demanding so care and proper etiquette is always called for) was used for wind instruments. While the branches are strong and the wood hard, the inner core is spongy and can be easily removed. It’s also suggested faeries particularly enjoy music played on Elder wood instruments.

Elder is often considered a “gateway guardian” and so her energies are invoked for protection and ease in crossing thresholds. It seems to me that’s the purpose of human elders as well, don’t you think?

I used to work at a place that had quite an impressive Elder tree on their grounds, and people always seemed to spontaneously find their way over there.  I don’t remember exactly how old the tree was, but its history was known and it was indeed quite an elder.  And quite magical in my opinion.  I was considerably more sad to leave that tree and all her friends than I was the job itself. 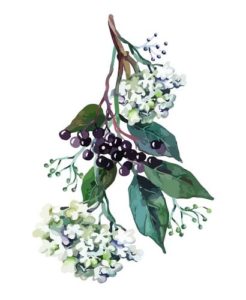 Are you friends with any Elders? Use elderberry syrup? Play music for the faeries?  Do tell – you know I love to hear.