I start most mornings with a cup of joe.  And it can all be traced back to the lovely coffee plant. 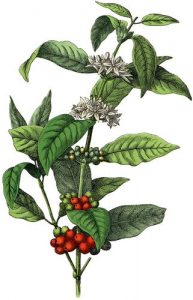 There’s an amusing tale of how the stimulating properties of coffee were discovered and it involves goats. Supposedly an Ethiopian herder noticed his goats frolicking from one coffee shrub to another noshing on the cherry-red berries. He had a few himself and experienced a caffeine rush as well. A local monk took note and offered some to his brothers and pretty soon the population was a whole lot more alert.

The brew we know though, with roasted beans, didn’t develop until around 1000 A.D. in Arabia. And by the 13th century it was being widely consumed.

Not too widely though as Arabia managed to keep a tight rein – the beans they exported were infertile thanks to parching, and it’s thought no coffee seed sprouted outside Arabia or Africa until the 1600s.

Supposedly when Baba Budan, a 16th-century Sufi from India, made his pilgrimage to Mecca he discovered the joys of coffee, and snuck seven coffee beans out hidden in his clothing.

Next it was Europe’s turn to get in on the craze. While it was Venice that introduced Europe to coffee via imported beans in 1615, it was the Dutch who brought in the first coffee plant.  And in 1696 they founded the first European-owned coffee estate on Java. It was a wild success.  To this day coffee continues to be grown on Java, with much of its arabica production comes from estates that were originally built by the Dutch.

But there was still some drama yet. A naval officer from Martinique, visiting Paris, thought Martinique could well rival Java in coffee production, and asked Louis XIV for clippings from the one and only royal tree. When the request was denied, he mounted a midnight raid and stole a sprout.  Although eventually the sprout made it back to Martinique and flourished, the trip there was fraught with trouble. The plant was almost stolen, the ship almost lost to pirates and then to a storm, and then to conditions where water was rationed and the coffee plant was in danger of dying.

By 1727 Brazil decided it wanted in on the coffee business, but there remained the small problem of needing to find someone to smuggle seeds in from a country that already had coffee.  No worries though because suave Colonel Palheta is dispatched to French Guiana, where he does a bit of flirting with the governor’s wife. At the state farewell dinner she presents him with a bouquet laced with a few seedlings.  And from these develop another great coffee empire. By 1800 the harvests were so great, coffee was no longer a drink reserved for the elite but truly a drink for the common person.  A regular joe.

If coffee doesn’t appeal to your taste buds, perhaps you’ll appreciate the aesthetics of coffee painting. Artist Hong Yi is well-known for her work, and you can view some of her portfolio here.

Whether it’s the plant, the product, or maybe even the painting – I hope java is delivering some joy.