If you know me you might know I’m fascinated by time. So it’s not unlikely that I might write about it. But you might also ask, what has time to do with the topic of this abecedarium which is Flora? Did I mean thyme? I didn’t. Let me explain.

I’m not actually talking about time, but clocks, and there are three particular clocks that in my mind fall into the category of botanical.

First the incense clock. I don’t know about you, but when I first heard of the existence of such a thing I swooned.  I’ve already established the connection of incense to botanicals here, so no arguments please that this doesn’t belong in my abecedarium. 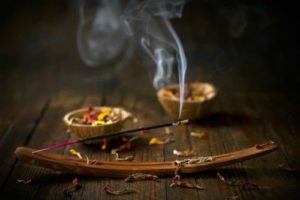 Incense clocks were first used in China in the 6th century, although there is some evidence that they in fact made their way there from India. While they came into wide use, they were also particularly linked to Buddhists and traveling monks brought them to Japan where they also became widely used and refined.

The two main types of clocks used stick incense and powered incense. With the stick clocks, the burning rate of the incense had been calibrated so time could be calculated. Often there were weights attached and when the incense burned past them they would drop into a tray adding a sound component as well. Stick incense could also be formed into spirals which hung.

Powered incense was laid out in trails in elaborate patterns with calibrated burning times. This method allowed for “breaks” to be incorporated into the trail – and a different scent filled in these spots. When the scent of the incense changed it would register consciously and one would be made aware of the time passage. This was particularly helpful when working on long projects.

Here’s an article which offers illustrations and a brief explanation of various incense clocks.

The second “clock” is one that actually involves flowers themselves.

Throughout recorded history people have observed that certain flowers open and close at different times, but in 1851 Carolus Linnaeus published an article proposing his Horologium Florae, flower clock, in which certain plants arranged in sequence of their flowering over the day, would constitute a way to tell time.  Linnaeus suggested flowers for his clock, but never planted one himself. Not many people have, or at least had much success with one. But the idea is fascinating, and if you’ve ever seen morning glory open early in the day or moonflowers at night, it easy to imagine how cool it would be to have a garden clock.

Here’s an article from the NY Times that explains a bit more about the Linnaeus clock and offers flower suggestions – both the original suggestions from Linnaeus and also more suitable current American flowers.

Finally, I’d be remiss in talking about time and clocks if I didn’t mention the dandelion.  When you consider a dandelion it’s almost impossible not to think about it in its two forms – that bright yellow ball of cheer and its ghostly white seed puff self.   Whenever I consider that, I think about this wonderful quote from Vladimir Nabokov:

“Most of the dandelions had changed from suns into moons.”

Sun to moon – day to night – that’s indeed the passage of time. 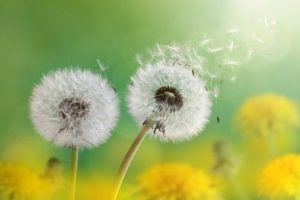 But lets talk about those seed tufts. Each one of the tufts is called a pappus, meaning old man/grandfather because they look like little white beards.  And when all the seeds have blown off, what remains on the stem is called a monk’s head because it resembles a bald pate.

While I always think of the seed balls as puffs, they’re also known as clocks.  Kids have long played the game of blowing on the puff and counting the number of blows it took to disperse all the seeds to tell what time it was.  I thought that was the origin of the association of dandelions with clocks, but I’ve heard something else as well.  Lore has it that the flowers open up at five minutes past five in the morning and close nine minutes past eight at night. I’m skeptical about the preciseness of that timing, but I simply never remember to check and see if it’s approximately close.  Of course if someone wants to volunteer to do the observations, I’d love to hear your report.

In the meantime, here’s a wonderful time lapse clip of a dandelion moving from sun to moon.

Today when you check the time, perhaps you’ll think about these different kinds of clocks and celebrate the beauty of our botanical world. It’s never to late to pause and appreciate.