Ylang-ylang is a large tropical evergreen tree which likely originated in Indonesia and is now widely grown in Malaysia and the Philippines.  It bears aromatic yellow flowers that are the source of an important and fragrant essential oil and also much used in perfumery.  It is sometimes known as the perfume tree. 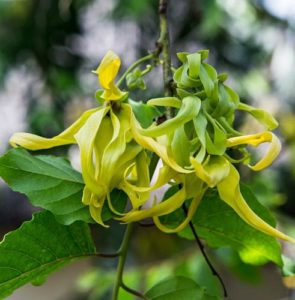 The word ylang-ylang is adapted from the Philippine origin alang ilang, and is often translated to mean “flowers that flutter in the wind.” In Malaysia it’s called “flower of flowers.”

Ylang Ylang has been used throughout history by many cultures, often for perfuming purposes. The oil was burned by Muslims; the robes of mandarins in imperial China were purified with ylang ylang; and traditionally ylang ylang blossoms have often been spread across the beds of newlyweds.  It wasn’t until Victorian times that it made its way to Europe in a big way, when it was a primary ingredient in Macassar oil – a popular hair dressing product.

As an essential oil it has many uses including skin care; heart soothing – both in the sense of lowering high blood pressure and easing heart palpitations, but also the emotional issues of depression, anxiety and stress. It’s generally considered a relaxing sedative kind of oil with euphoric tendencies.

Essential oil is produced from cultivated trees, which require a great deal of care. Every two months the branches are pruned, and when the flowers are ready, they are handpicked. Harvesting is very time-sensitive – the aroma of the flower is evident two to three weeks after blossoming.

It is one of very few essential oils that undergo a natural separation process during distillation, and hence a process called fractional distillation is used, collecting five grades of oil (extra, I, II, III and complete).  The Extra fraction is collected from the first 30-90 minutes of distillation; Fraction 1 from the next 2-3 hours; Fraction II from the next 3-6 hours; and Fraction III from the last 6-24 hours of distillation. The “Complete” is processed as a total, uninterrupted distillation of 20-24 hours. Because it contains compounding of all the stages of distillation, it’s considered a full aromatic and therapeutic spectrum and this is was is often most prized by aromatherapists working therapeutically.  However the other fractions/grades are used widely in perfumery.

Here’s a brief video showing the harvesting of the flowers and a peek at the distilling process.

We all have different “noses” and experience scents differently, but it’s also true there is often a wide variety of the quality of oils available depending on many factors. In my opinion it’s always wise to purchase the best oil you can, choosing from distributors and/or manufacturers that produce ethically sourced products. Because I work as an aromatherapist and a botanical perfumer, I work with lots of different oils. With aromatherapy you’re basically looking for therapeutic effects, and with natural perfumery, although often working with many of the same ingredients, the purpose is often to create a quite complex blend designed to have top, middle, and base notes to please the senses. Working in both arenas, I have the immense pleasure of having quite a variety of oils to enjoy.

Ylang ylang is intensely sweet and highly floral with a spicy/fruity component  and is often described as “creamy”.

There’s a charming folktale about the origins of the ylang ylang flower. Long ago, there were goddesses in charge of choosing which trees would be blessed with the ability to flower.  While other trees around her were chosen, poor ylang-ylang was not, which made her quite sad.  Especially when those trees who had been blessed became boastful about their beauty, and said harsh things like suggesting non-flowering trees should be cut down and used for firewood.

One day a terrible storm was seen approaching, and all the trees prepared for it. The flowering trees especially folded themselves up tightly so as to protect their blossoms.  When the rains came, two wooly worms were desperate to find shelter, afraid they’d be washed away in all the water. They asked the trees, one by one, if they could shelter on them, but they were refused, especially by the flowering trees who accused the wooly worms of wanting to eat their leaves and flowers.

But poor sad ylang-ylang welcomed the wooly worms and offered them safe shelter. The storm raged for days, but finally it was over, and ylang ylang hunted for her new friends. She grew even sadder when she could find no sign of them and was certain they had been washed away.  She kept searching though and found something else in her branches – something that looked like two flowers.  In the middle of the storm the wooly worms had transformed into butterflies!

The goddesses heard of ylang-ylang’s compassion and good deed and came by to offer her a flowering blessing as a reward.  They gave her yellow blossoms that resembled the folded wings of the butterflies she had sheltered.  And ylang-ylang was so happy, she emitted the sweetest scent of delight evermore.