Zinnias are popular garden flowers because they come in a wide range of flower colors and shapes, and they can withstand hot summer temperatures, and are easy to grow from seeds.

A curious alternate name for them is youth and old age, and frankly I’ve never come upon a reasonable explanation. It’s speculated the reason is because the zinna’s old blossoms still look new even as younger ones begin to open; or perhaps it’s because zinnia’s tend to bloom profusely from early summer before quickly succumbing at the first autumn frost; or even the fact that zinnia’s stiff whiskered stems are such a great contrast to the plants tender blooms.  Whatever the reason, it amuses me to end my abecedarium with a flower known as youth and old age. It’s kind of how I feel through the creation of an abecedarium – full of bright enthusiasm and exuberance in the first throes and simply slowing down and bit tired by alphabet’s end.

I love this vintage image of zinnas. It’s a postcard reproduction print of a old seed catalog cover. Perhaps you can tell from the photo that it’s covered in glitter. Adds quite a bit to the fabulousity factor don’t you think? 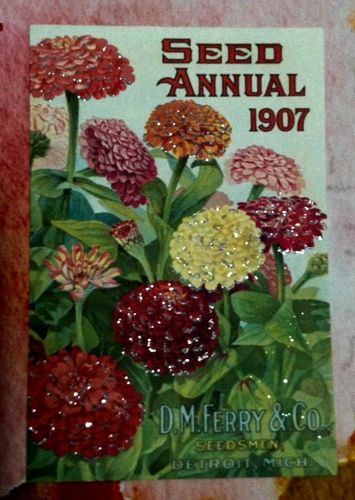 There’s a rather fabulous story about how the flowers got its name. It was named after Johann Gottfried Zinn, a German botanist who lived in the 18th century.  As the tale goes, Zinn was traveling deep in the mountains of Mexico collecting specimens, and came across a patch of purple flowers he’d never seen before. He gathered a whole bag of them. Later, a bit further on the path, he was surprised by a group of thieves who grabbed his bag. When the only thing they found in it was the now fading purple blossoms, they decided he was an idiot. Who else would be traveling through the wildness with only dead flowers? Since it was unlucky to harm the feeble-minded, they let him go unscathed.

I love that story. It seems fitting to honor a flower who likely saved someone’s life, or at least gave him a wonderful adventure to tell.

The zinnia is a hero in another story as well. Patricia Hruby Powell wrote a children’s book Zinna: How the Corn was Saved, which is a retelling of a Dine/Navajo tale. A young boy is guided to go on a quest to find Spider Woman and ask her how to save his people’s failing crops.  As he begins his journey he unwittingly disturbs a spider in her web, but continues on his journey meeting a number of animals. He asks each where to find Spider Woman. Each give him yellow zinnias and directions, and he wanders around until he returns to near where he started.  He find Spider Woman who is angry that he did not notice her before. But he speaks with her kindly and with respect and she tells him his people need to plant zinnias among their crops.  The corn, beans, and squash, ripen overnight, saving his people. It’s a charming and beautifully illustrated tale.

In floriography, the Victorian language of flowers, the meaning of zinnia varied slightly depending on its color, but in general terms meant thoughts of friends, constancy and lasting affection.

Both butterflies and hummingbirds are fond of zinnias which is another reason to plant them in your garden. 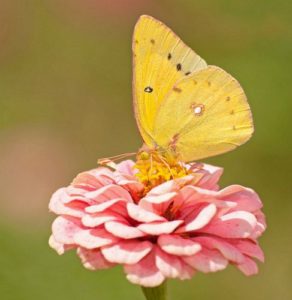 Zinnia has clearly traveled far from its humble beginnings. All the way to space in fact. In 2016 astronaut Scott Kelly posted photos of blooming zinnia flowers grown from seed aboard the International Space Station. While originally the headlines claimed these were the first flowers grown in space, technically that milestone honor was captured in 2012 when astronaut Don Pettit grow several plants, albeit in a personal science experiment rather than an official NASA mission.

Thanks for journeying with me through the alphabet exploring the topic of flora according to my daily whim. I hope you’ve found some new ways to enjoy flowers and hope they’re always a part of your life. It delights me to gift you one, if only in our imagination, reminding you of the floriography message of friends, constancy and lasting affection.