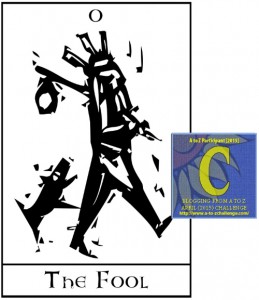 C is for Cartouche.

I had an amusing and curious dream last night.  I got a call inviting me to a “right your name party.”  I had no idea what that meant, and I didn’t actually think there was anything wrong with my name, but the caller was insistent and I was curious so I agreed to go.  When I got there I realized I had misunderstood – it wasn’t a “right” your name but a “write” your name party.  And there were stations set up all over the room where you could write your name in different language alphabets, on different materials.  By the time each of us worked our way around the room visiting each station, we each had a huge collection of our name written in various forms.  We were instructed to stack the forms in a tidy pile and when we were done, the forms magically morphed into our clones.  The host of the party remarked how this was a perfect example of how powerful names are.

I’ve been thinking about the dream since I awakened, and was inspired to dig around through my collection of tarot and oracle decks and find the Rosetta deck.  I confess I have a hard time with this deck and don’t read with it very often, but there is a card in it I love.  A custom-made significator card with my name written in hieroglyphics in a cartouche  being scribed by the Egyptian goddess Seshet. 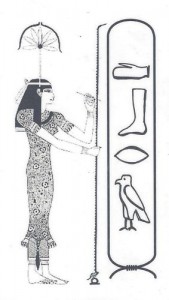 In ancient Egypt having one’s name inscribed in a cartouche was reserved for kings, and rarely other royalty, but certainly not commoners.  The cartouche symbol (an oval ring with a length of rope folded and tied at one end) represented all that the sun encircled.  With the king’s name inside, it meant he ruled it all.  The encircling cartouche form was also seen as a ring of protection, thus protecting the royal name contained within it.

While I’m not a royal, it does amuse me that my name Deborah means Bee, and is actually sometimes defined as Queen Bee.  So perhaps a cartouche isn’t as far-fetched as one might first believe.  On the other hand, I think we’re all up there in the hierarchy of extraordinary and powerful beings and certainly deserve our own cartouches.   Especially Fool, whom I’m sure doesn’t actually care about such things.  But in any case I expect Fool was amused by my homophone dream.  And I know for certain Fool has a lot show me regarding signs and symbols we’ll be coming across in this month’s journey.

What about you?  Do you believe in the power of naming?  Prefer to write or be right?  What does your name mean?  Do tell – you know I love to hear.