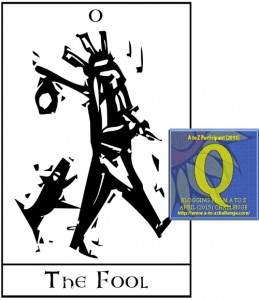 Q is for quicksilver.

Quicksilver is an alternate name for mercury, and somehow it feels like a perfect element to associate with our friend Fool.  Earlier I talked about Fool’s Gold and now let’s talk quicksilver.

Quicksilver has long been a source of fascination – it’s been recovered from ancient Mayan and Egyptian tombs, and it was most certainly of interest to alchemists who believed it was essential in transformation.   The etymology traces from Middle English quyksilver, from Old English cwicseolfor, and literally means “living silver” which is based on its ability to move.

Those magical, alchemical, quick-moving properties feel very connected to Fool to me.  I love the word quicksilver, but I also love the word mercury as well as the element was named after the Roman god Mercury wearer of the winged sandals and helmet known for his speed and mobility.

I have a strong connection with Mercury (and Hermes, his Greek iteration).  He was the fleet-footed messenger of the gods, fact-gatherer and disseminator of information, and he traveled between the worlds.  Both the world of the gods and humans, and between the outer world and the underworld.  He is a crosser of boundaries – he escorted Persephone from the underworld; he released Ares from a jar; he freed Dionysius from his father’s thigh. His winged shoes (talaria) symbolize his function as a go-between from the world of human affairs and the realm of the gods. He delivered messages from the gods to mortals, and that act characterized his function as a bridge from the mundane to the sacred.

I like to think I embody some of these archetypal divine energies in my work.  Certainly my work as a channel qualifies as a messenger; and my work in the Akashic Records is crossing a boundary.  There can be playful trickster energy about Mercury/Hermes as well.   If you sign up for my snail mail list, which requires a bit of a perusing of my website, I send out periodic surprise love letters.  I know Mercury would approve.

And don’t you think there is something mercurial about Fool?  He may seem to be ambling mindlessly, and yet in any moment things can change and an adventure is at hand.  If quicksilver is dropped it shatters into perfectly spherical drops and then just as easily coalesces back into wholeness.  That feels like perfect Fool energy to me as well.  And a bit tricksterish, which of course feels like Fool.

When I found the wonderful vintage Victorian Revival style brooch of Mercury/Hermes I mustered those proverbial mercurial reflexes and grabbed it pronto.  Isn’t it wonderful?! 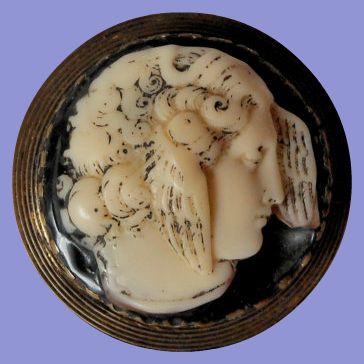 Communicating, connecting, conversing, clarifying.  Opening to inspiration, entertaining new thoughts, sinking into a novel or losing oneself in some poetry; traveling a new route to some place you’ve never been or a well-worn one to a friend’s house.  All those things feel like both quicksilvery Mercury energy and in the Fool’s repertoire as well.

What do you think?  What might you invoke some quicksilver energy for?  Love Mercury like I do?  Wish you had winged sandals?  Do tell – you know I love to hear.