You are here: Home » Foxes, Blue Potatoes and Colorful Bedding

It’s Friday and you know what that means around here – a peek into my week ala the Scattered Life Collective.

out the window:   What a gorgeous day outside – a bit of a breeze blowing the trees and urging some the leaves into freefall.  The sun is shining for the first time in days.  While some of the trees have turned golden, so far I’m not seeing a whole lot of brilliant reds and oranges this year.  There’s still lots of green though, so the turning season is still early.

on the menu:  My CSA box contained blue potatoes this week and so I’m going to give this Fresh Corn and Blue Potato Hash recipe a try. 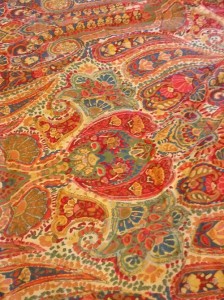 reading:  A Year in Japan by Kate T. Williamson.  What a fabulous little find!  It’s an offbeat look at some delightfully obscure facts about Japanese culture as she learned about during a year’s stay there.  It’s filled with her artwork.  My floriography rating is an armload of peach blossoms which stands for “I am your captive.”

watching:  I do love spoken word poet Shane Koyczan and his Shoulders.

listening: Ylvis What Does the Fox Say has been on heavy rotation this week.  I met a fox in my dreams this week and so of course I’ve had to play the song. A lot. And now I pretty much want a fox costume.  Several weeks ago I had a dream where a friend and I found out we owned a costume shop.  I bet I’ve got a fox costume there!

project I’m loving to support:  I’m really not much of a computer game person aside from the occasional round of Spider or Mahjogn.  While I’m awaiting the reissue of the fabulous Grim Fandango I didn’t think anything else would catch my attention.  But somehow Elegy for a Dead World: A Game About Writing Fiction popped up on my radar and I think this Kickstarter-funded project sounds like it might be fun.

on the wish list:  What a delight to discover the Seven Stars Tarot site this week.  And this Sola Busca deck has me swooning.

So there you have it – I’ve shown and told.  Your turn.  What’s been happening in your week?  What things are you made of?  What computer games do you play?  What animal would dress up as?  Do tell – you know I love to hear.