You are here: Home » GIT – A Message from Hermes

GIT – A Message from Hermes 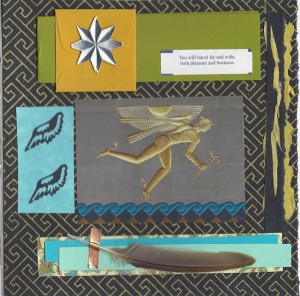 Yesterday as I was consolidating some piles of scraps I came across an image of Hermes/Mercury.   I don’t remember where it came from.   That for me is a big part of the delight of having collected images for years – you have time to forget things and then get to rediscover them with delight all over again.

I have a great love for Hermes/Mercury.  Seriously, winged cap, winged shoes!  Who wouldn’t want those?!   Because Mercury is known as a messenger, I thought for the longest time that my affinity had to do with my devotion to mailart, and my loving invocation of the patron of communiqué delivery.   And I do believe that’s how I first allowed myself to welcome in those energies and start my relationship with Mercury.  Just like any true friendship, things have evolved over the years as I have come to understand and experience the deeper layers of connection.  Hermes has indeed become a beloved ally.

Hermes, messenger of the gods, fact-gatherer and disseminator of information, was the son of Zeus and the goddess Maia, who is a springtime goddess associated with the act of blossoming.  But there’s another aspect of Hermes that is less widely known. He is a crosser of boundaries – he rescued Persephone from the underworld; he released Ares from a jar; he freed Dionysius from his father’s thigh. His winged shoes (talaria) symbolize his function as a go-between from the world of human affairs and the realm of the gods. He delivered messages from the gods to mortals, and that act characterized his function as a bridge from the mundane to the sacred.

I like to think I embody some of these archetypal divine energies in my work.  Certainly my work as a channel qualifies as a messenger; and my work in the Akashic Records is crossing a boundary.  There can be playful trickster energy about Hermes as well.   If you sign up for my snail mail list, which requires a bit of a perusing of my website, I send out periodic surprise love letters.  I know Hermes would approve.

Yesterday I also discovered my summer reading project.  It seems every year I stumble upon a book series that captures my attention and makes for fun summer reading.  One year it was the Charles de Lint Newford books series   (can you say YES – Crow Girls!!!); last year it was the Zodiac Series by Vicki Petterson.  And this year I discovered Anne Zouroudi.  I just finished her book The Messenger of Athens which is the first of her series of Greek Island mysteries starring detective Hermes Diaktores.   Coincidence?  I think not.  And yes, Hermes is not your average gumshoe.

So tell me, do you have a special relationship with Hermes/Mercury?  Some other archetypal energy?  If winged shoes aren’t your thing, what kind of footwear is?  Have any must-read recommendations?  Please share – you know I love to hear!