You are here: Home » It May Be February But I’m No Smellfungus

It May Be February But I’m No Smellfungus

I’ve missed doing a weekly post about what’s been up in my world and what I’m loving, so today I’m returning to that practice.  And as part of the meanderings through my world this week elephants and Lakshmi made appearances.  So what better time to share this favorite vintage image of both: 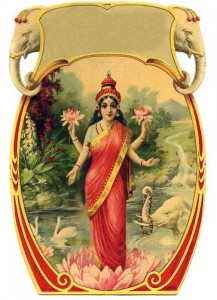 internal landscape:  I can say one thing about this week, and February in general – it’s been an odd mishmash.  It always strikes me as hilarious when a month can both feel eternal (oh snow and ice, when wilt thou melt?!) and flashing by in an instant (oh projects, why is there not enough time to lavish thee with the loving attention you so deserve?!)  Overall I’ve had this sense of confusion, as though I can’t quite put my finger on what I did yesterday or three days ago or way back in January.   It feels like some of my known roadmarkers have gone missing, and this is getting expressed in some amusing ways.  For instance, our regular mail carrier has been off for three weeks.  During that time we’ve not had mail delivered three times and all the other days have been varying substitute carriers, some of which are clearly doing our route after they’ve completed their own regular route.  So we had a couple days where mail has been delivered by flashlight late at night; another time very early in the morning and later followed by a regular daily delivery.  And each day is a surprise.  And that’s pretty much what my internal landscape feels like.  Some days feeling that way is more delightful than others.

epicurean adventure:  I may have missed out on pancakes on  Tuesday, but I’ve got this Cinnamon Dutch Baby on the menu.  Because breakfast for dinner is always the best.

turning the pages:   I am seriously behind in my reading and have no finished books to report on.  But apparently I’m in one of those periods where I have a larger number than usual books in the process of being read.  Seems my attention is jumpy and my focus short.

on the playlist:   I can’t seem to get enough of this acapella of Bob Marley’s Could You Be Loved?

favorite word of the week:

Smellfungus (n.): a perpetual pessimist; fault-finder; disagreeable curmudgeon.  Based on the name of an 18th century character in a novel.

project I’m loving to support:    I’d like to see this documentary film about elephants made.

And I can’t help but think about Khalil Gibran’s brilliant admonition:

“Between what is said and not meant

And what is meant and not said

Most of love is lost.”

And there you have it – a peek into what’s been holding court in my brain cells this week.  What about you?  What delights are you invoking to help you through this longest short month?  What have you been dreaming about?  What appeals more to your inner adventurer:  tightrope walker or passport designer?  What favorite word has been rolling off your tongue this week?  Do tell – you know I love to hear.