You are here: Home » Lily of the Valley

Lily of the Valley 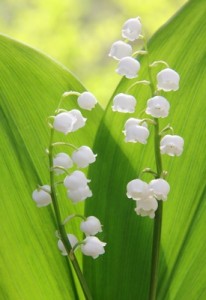 The official flower of May is Lily of the Valley, and just this week mine came into bloom.   Definitely late, but that just makes my appreciation all the more keen for having to wait.  How I love that scent!

I’ve always thought it would be lovely to be in France on May 1, where I’m told it’s customary to wear a little sprig of muguet de bois.  Lily of the Valley is referred to as a porte-bonheur – literally, “bringer of happiness.”  How lovely is that?

Given the extent of folklore associated with Lily of the Valley, it’s a fair guess it’s not just the French who are charmed by this precious little flower.  They’re known as fairy bells in Ireland and it’s said only the fae can hear them ring.  The faeries are also said to use them as ladders.

The blossoms are so clearly bell-shaped I have a harder time understanding how they’re interpreted as tears.  But Christian lore holds they sprang from Eve’s tears after she and Adam were banished from the Garden of Eden; or alternatively they’re said to be Mary’s tears shed at the crucifixion.

The Lily of the Valley was the floral emblem of Yugoslavia and is the national flower of Finland.

For some reason knowing those two factoids has me thinking about what flowers I might include on my “nation-of-me” banner if I were to design such a thing.  I’d probably want to include so many that it’d be a flying garden, but that thought too amuses me.

I’m busily working on some aromatherapy blending projects (more about that another time) – and how I wish there were a lily of the valley essential oil.   But alas there is not.  I offer this as a gentle reminder that things aren’t always correctly labeled, whether innocently or otherwise.  So if you come across lily of the valley scent with a claim that it is an essential oil do be skeptical.

Of course knowing that makes the short time the lilies of the valley are actually blooming all the more precious.

I have found an old recipe that suggests you can infuse sweet almond oil with lily of the valley flowers, repeating the infusion a dozen times with the same oil using fresh flowers for each infusion and you may end up with a lightly scented oil.  This of course is not an essential oil, but it might be a nice experiment.  It’s too late for me to try it this year, but hopefully I can next year.

In the language of floriography Lilies of the Valley signify “return of happiness.”

And on that happy note, just for the fun of it, let’s finish off our celebration of my dear floral friend with a dance video.

So tell me, what flower would you declare the official May bloom?   What would you include on your floral flag if you had one? Any Lily of the Valley stories to share?  Do tell, you know I love to hear.  I’m linking to Lori Moon’s May Flower challenge, and invite you to check it out as well.