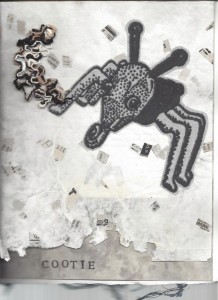 I had to laugh in delight when Aimee announced the topic.   Three things came to mind immediately and they all begin with the letter C. Coincidence? Perhaps.

I’m not sure it was the game so much that amused me but the strange circumstances associated with it.  My parents had a friend who would pop in and out of our lives randomly and whenever he showed up he’d bring a gift.  And it was always a game of Cootie.  At first I think we chalked it up to absent-mindedness – that he’d forgotten he’d already given us that game.  And then we moved it into the realm of extreme eccentricity, when game after game would appear.  We could have literally created an army of little plastic cooties.  These were the original, now vintage, cooties that were kind of creepy looking, unlike the current cute-ified version.  Just like the image on my journal page above.  The tagline on the original game box said “an exciting educational game for all ages” and for some reason that always, even then, struck me as hilarious.

But they were dear to my heart. Proboscis and antenna, and legs that fit into square holes in the body, but eventually fell out over time. I became a life-long cootie convert.  And so I never really quite understood the childhood taunt meant to insult by telling someone they had cooties.   And instead for years I’ve kept a ragged old perfectly mis-matched cootie on the windowsill of my studio.  Makes me laugh and keeps a tie open to that me of so long ago.

Oh how I remember one especially rainy spell one summer when my sister taught me (and my brother) how to play canasta.  She taught me that year how to bridge shuffle, and that’s probably why the deck of canasta cards remains imprinted so clearly in my mind.  It’s one of those amazing kind of memory links that can pull me right back into the moment – I can hear the cards shuffling, I can smell the deck, and I can see the flower pattern on the back of the cards.  Which is why I hooted with delight when I did a google search for canasta cards and found it – pictured below.  It must have been a popular pattern, but it was like getting a little cosmic wink from the universe.

My sister died when I was in my 20s and sometimes I wonder about the memories I hold.  They certainly become more precious because there aren’t any more to be made.  But I don’t want them to be exaggerated and made into more than what they truly were. Just moments of our lives – and that’s blessing enough.  Finding the picture of those cards felt like a lovely little confirmation my mind is intact.  😉

Oh how I wanted to be a detective when I was a kid. How I wanted to be surrounded with mystery and puzzling circumstances that I could apply my brain power to.   And how delighted I was to receive the board game Clue.    It was Ms. Scarlet in the conservatory with the candlestick.  Or Colonel Mustard in the study with a lead pipe.  I was GOOD at it, which I was sure was proof positive I’d make an excellent gumshoe.

So there you have it – my 3 Cs of childhood merriment.   I’m passing the spinner to you now.  What were your faves?