is for Fibonacci sequence

What a delight it is to know you.  You’re so magical!  In the perfectly wonderful in-plain-sight kind of way.  Everywhere.  I so love that you were known in the very ancient culture of India and then introduced into more modern awareness in the 1200s by mathematician Leonardo Pisano Bigollo contemplating a problem about rabbits.  I laugh every time I think about that because learning about you has always felt a bit like falling down a rabbit hole myself.  It makes me smile to think another great Leonardo, da Vinci, was such a brilliant user of the Golden Ratio which is approached mathematically through Fibonacci sequence ratios as they approach infinity.  Must be something in there about great Leonardos thinking alike.  I love knowing you show up in nature in such magnificent and countless examples. I cannot look at a sunflower, Nautilus seashells, branches on a stem, the pattern on pineapples, and not think of you.  I even read a bee ancestry code that claims to follow your sequence, and how that made me smile.  But I think the best tale ever has to do with the eye of Horus, which when destroyed was put together again by the great god Thoth, one of my personal favorites.  He was said to use mathematical fractions to put it together, and that the hieroglyphic also incorporates the geometric progression of the Fibonacci series.  But for some odd reason rather than the parts of the newly re-constructed eye adding up to the expected whole one, they add up to 63/64.  And it is said that missing bit was Thoth’s commission.

As you can see, you do tend to lead me down the rabbit hole when I think about you – and I’m always grateful.  So much fun to be had, and so much beauty to explore.  Thank you!  I love you! 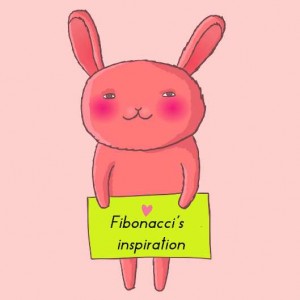 And here’s a little Fibonacci related music – Lateralus by Tool

You’re next in the sequence – your turn to share.   Have a favorite number?  A topic that invariably leads you down a rabbit hole?   A favorite series – perhaps of the television variety?  Do tell – you know I love to hear.