You are here: Home » Mad Hatters and Pointy Heads

Today, 10/6, is celebrated as Mad Hatter Day in honor of the Alice in Wonderland character who wears a top hat with a price ticket on it marked 10/6.  It’s meant to be celebrated as a day of silliness, and of course I think that’s fabulous.  But I especially like the holiday because it makes me think of hats.  And hats are very dear to my heart.

My mother was a milliner so I come by my fondness honestly.

While we likely think affectionately of Carroll’s Mad Hatter, in truth, mad hatter syndrome was not a very laughable matter.  Hat makers in the 17th and 18th century began using mercury extensively in felting hats and as a result of toxic exposure suffered neurological damage, often extensive and devastating.

While the element mercury needs to be handled cautiously, I think it’s rather amusing that on this particular Mad Hatter’s Day we’re also in the beginning days of this round of Mercury’s Retrograde.  I suspect more than one person will be claiming some more-crazy-than-usual incidents.

I have a strong connection with Hermes/Mercury. And at some point, it occurred to me to wonder how the element mercury got associated with the god Mercury.  Hermes/Mercury, fleet-footed messenger of the gods, wore winged shoes and a winged cap, and he travelled between the worlds.  Both the world of the gods and humans, and between the outer world and the underworld.  The element mercury is also known as quicksilver, because of its curious characteristic of remaining liquid under normal temperatures despite being a metal.  If quicksilver is dropped it shatters into perfectly spherical drops, and then just as easily coalesces back into wholeness.  Ancient alchemists were fascinated with mercury and believed it essential in transformation.  And so the connections do make sense to me.

Of course one of the things that fascinates me about Hermes/Mercury is his winged hat.  As far as chapeaux goes I have to call his a total winner.

But speaking of hats, today I was dusting off this dear friend. 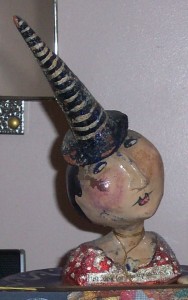 While I didn’t necessarily mean her to look like a witch, that’s what most people think of when they see her.  But when I looked at her today, it suddenly occurred to me to wonder if there was some connection between the pointed witch hat and a dunce cap.  And what exactly was a dunce cap?

Praising the readily-available research capabilities of the internet, here’s the answer.   There was a philosopher theologian contemporary of Thomas Aquinas in the Middle Ages named John Duns Scotus.  He recommended the wearing of conical hats to stimulate the brain.  Alas, as other of his theories were rejected in later times, Duns (dunce) became a pejorative which meant someone “who foolishly held on to outdated doctrine.”  And from there it deteriorated into anyone who was considered stupid.  And then of course the wearing of the conical dunce hat made its way into the educational system as a shaming tool.  Of course, I like to think that those poor recipients of the dunce hat actually got a dose of brain stimulation and reminder that they too might actually be a wizard.

There’s a long history of wizards wearing pointed hats, although the first known ones were actually rigid and carved with astronomical symbols.  Research also suggests that cloth conical hats were actually popular in cities at one point and eventually made their way into the countryside at the point they became out-of-fashion.  And so the country women most likely to practice the herbal and magical arts, and most likely to be ostracized as not-mainstream were wearing these hats and identified as witches.  I’m not sure about the accuracy of that, but again I like to think there was some delightful brain stimulation going on no matter what.

So in my way of thinking these conical hats are actually the thinking caps they originated as.  And that leads me back down the circuitous path that once had me pondering that wisdom was really something that could be contained in a wise dome (one’s head) and that every wise dome required a decorative hat.  Because that’s how it works in my world.

And here’s one of my favorite wise domes. 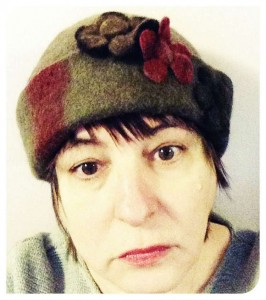 And now you’re it.  Have something silly to share in honor of today?   Are you a hat wearer?  Love Hermes/Mercury like I do?  Like the idea of brain stimulation?  Do tell – you know I love to hear.