You are here: Home » Marigolds on the Ground Chrysanthemums in the Sky

Marigolds on the Ground Chrysanthemums in the Sky 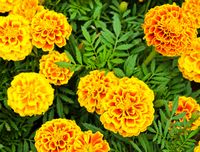 I’m finding it hard to believe it’s Friday already, but then again that’s the kind of week it’s been.  I seem to have come untethered from time.  My first indication was when setting the clocks for time change over the weekend I set them all the wrong way – ahead instead of back.  And then a couple days later, it suddenly occurred to me it was the 3rd, a day AFTER my friend’s birthday.  I quickly sent a belated e-card with apologies and it wasn’t until the following day that I realized the birthday was actually in October, which I kept thinking it was, and not November.  (Bonus confusion points for me because I had in fact actually remembered my friend’s birthday in October on the correct day and sent greetings.  Sigh.)  Yep, it seems I’m dancing in my own world of timelessness.  And yet here we are at Friday, and so I’m ready to play in the weekly Scattered Life Collective invitation to peek into my week.  Even though founder Cynthia is taking the month off blogging, I’m choosing to continue on with these little weekly capturings in the interim.

out the window:  It’s bright and chilly out and looks very much like a November day in Chicago.  Many of the trees are bare now, but a few are still holding on to golden leaves and there is a deliciously welcome spot of color from my neighbor’s Japanese Maple that is blazing flames of scarlet.  I’ve still got my porch railing flower boxes out and they’re still hanging on but I think it won’t be much longer.  I’ll be sad to call that blooming part of the year over.

on the menu:  Couscous with Apples and Cranberries.  A pretty simple autumn salad.

reading:  I’ve got two fun finds to report this week. Both books are based on unusual premises.

watching:  This video has millions of views so perhaps I’m the last person on the planet to discover it, but what can I say?  It delights me.

listening:  Mary Pinkoski is a Canadian spoken word artist and I’m totally in love with her.  This poem rocks my world.  See if it does yours as well.

favorite word phrase of the week:   I have Julie Kirk to thank for turning me on to this Shakespearean treasure: “This deed unshapes me quite.”  I’m seriously swooning over this one.

And there you have it.  What’s been capturing my fancy this week.  What about you?  What archetypes do you identify with?  If your family was a tree, what kind would it be?  Like naming the moons?  What kind of week have you had?  What unshapes you? Do tell – you know I love to hear.