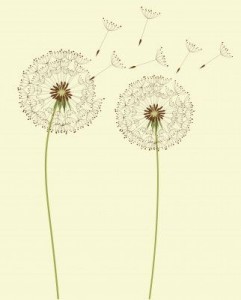 I was feeling a little bit “off” this morning  – a little bit sad and wobbly and lacking in enthusiasm.   Certainly not my favorite way to start a day, or a week for that matter.

It got me thinking about balance.  About how we know when things are off, and what we do to right them.  About how wholeness contains everything.  And what we’re really doing in life is forever altering our perspective.

And because I believe we live in a beautiful benevolent universe filled with helpful messages, I paused for a minute and listened.  I was called outdoors, which I’m sure is always a good thing, but most especially useful when looking for balance.

The very first thing I saw was a lone dandelion in the grass, and I had to laugh.

Dandelions are all about perspective.   They’re bright and cheerful, famous for their great herbal remedy magic, and the epitome of tenacious survival; they’re also greatly disdained as obnoxious weeds.

So first reminder: we’re always in charge of how we respond to things. I needed a dose of cheer, and that little ball of sunshine was standing there daring me not to smile.  Who was I to resist?

Ever wonder about the etymology of dandelion? It comes from French dent de lion, meaning lion’s tooth, and refers to the way the dandelion’s leaves resemble to toothy snarl of a roaring lion.   Seriously, how can you not smile at that?

But when you consider a dandelion it’s almost impossible not to think about it in its two forms – that bright yellow ball of cheer and its ghostly white seed puff self.   Whenever I consider that, I think about this wonderful quote from Vladimir Nabokov:

“Most of the dandelions had changed from suns into moons.”

Isn’t that wonderful?  And doesn’t that expand how you think about dandelions?  Containing those two disparate images – sun and moon.

As cheery as the sunny flower is, the seed puff is fun as well.  Did you know each of the tufts is called a pappus, meaning old man/grandfather because they look like little white beards?  And when all the seeds have blown off, what remains on the stem is called a monk’s head because it resembles a bald pate.

While I always think of the seed balls as puffs, they’re also known as clocks.  Kids have long played the game of blowing on the puff and counting the number of blows it took to disperse all the seeds to tell what time it was.  I thought that was the origin of the association of dandelions with clocks, but recently I read something else as well.  Lore has it that the flowers open up at five minutes past five in the morning and close nine minutes past eight at night.  I haven’t tested that, but if someone wants to volunteer to do the morning observation, we’d love to hear your report.

To round out my little tribute to the mighty dandelion, here’s the Deloreans singing Dandelion.

So what do you think – are you weighing in on the side of dandelions being mini  marvels or not-so-pretty  pests?   Or are you more of a sun person or a moon person?  Do tell – you know I love to hear.

I’m linking to Lori Moon’s May Flower Challenge – check it out.