You are here: Home » Miscellany: B is for…

Miscellany: B is for…

is for Bird Wings

This line from one of Anne Sexton’s poems, In Celebration of my Uterus” has been sticking around circling in my brain for several days now.

“Everyone in me is a bird.

I’m beating all my wings.”

For me it’s my heart where I’ve been feeling the beating of the bird wings.

About a month ago I began a meditation practice which I start by first tuning into my pulse.  I have to say it’s a beautiful way to focus one’s attention inward.  The purpose of this particular meditation for me is to connect with a specific guidance; a lineage of which I am part.

It occurred to me early on in this practice that what I’m connecting to is like a voice I’ve kept trapped hidden inside, and once I made that connection of course it was an easy jump to think of caged bird.  So the bird metaphor has been percolating here for a bit.

Last week when I had a bit of a scare/panic and found my heart racing I thought of birds as well.  When I was small, stepping into a flock of birds such as pigeons or gulls who hang around until the very last moment and then swoop collectively into motion was a very frightening thing.  Their very nearness and the loud flapping of their wings as they did a group takeoff flight made my heart race, and it didn’t help I worried about having my eyes pecked.

It’s interesting how the physical cues associated with fear are also present in excitement.  I love the irony of it.  And can’t help but think it’s a masterful cosmic wink offered as a reminder that fear is a perspective and one we don’t need to be tied to.

Last night I had a dream about birds in my heart and in the dream I asked why they were there.  They said they were there so the flutter of their wings would remind to stay tickled and delighted and know that is one of the heart energies I carry.

But they also reminded me they flap their wings when I’m sad as well.  And to remember that when my heart hurts.  That I should think about how they flapped their wings so hard that it would bruise my heart, and that way I could carry the imprint of what had affected me so deeply with me always.

I’m needing to think about that message a bit more.

But in any case, here are the three tarot/oracle cards that speak to me about these birds. 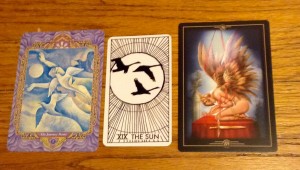 As a bit of any aside, but in my mind a perfect deviation given that this post IS part of a miscellany, I was thinking about the zodiacal bird association with this time in Scorpio.  Although traditionally Eagle is considered the bird connected with this sign, I far prefer the Pancha Pakshi Zodiac of India which relates birds to the astrological signs.  According to this system the corvids as associated with Scorpio.  So my beloved Crows and Ravens (as well as jackdaws, magpies and others) get star billing.

I love this article’s quote “In true Scorpio fashion, they (the corvids) are mysterious shape shifters with identities that are often interchangeable. Edgar Allen Poe’s poem The Raven hints at their haunting and sinister side, and upholds the theory that these clever and suspicious birds can actually speak. Pluto, ruler of Scorpio casts a dark shadow to reveal its rulership here through in the term raven mother. This describes a mother who neglects her offspring and places them in peril of death. Raven mother comes from a legend that the mistrusting mother ravens will not feed their newborn hatchlings because they are red, lacking the requisite black feathers. The gods had to rescue the babies and provide insects for a few days until the tiny black feathers would peek through, earning the mother bird’s confidence and care in the nick of time.”

So tell me – is everyone in you a bird?  Are you beating all your wings?  Have a bird-related tale to share?  Do tell – you know I love to hear.