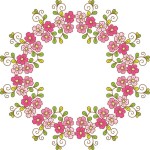 I’ve loved paper since before I could talk.  My mother said I could entertain myself literally for hours by ripping paper.  But I have a very clear memory of the Christmas I received my first origami set – an instructional booklet and a huge fanned-out array of colored papers. I was pretty much convinced I had hit the mother lode of treasures.  And my fascination and delight with paper has never ceased.

Last night I had a Hercule Pirot-esque dream where one of the characters was leaving clues hidden inside elaborately folded but ever-so-tiny origami crowns.  And they were managing to fold them with one hand while blowing smoke rings and singing French lullabies.  Have I mentioned I love my dreams?

I’m only an occasional folder, and I what I really like to fold are functional objects like boxes.   But for today’s index card art of the Daisy Yellow ICAD challenge, I folded a little dimensional butterfly. 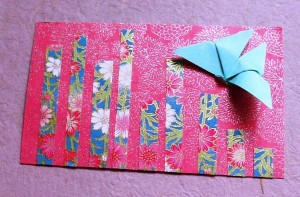 I think of origami as one of those right-brain left-brain equal opportunity engagers.  Here’s a short TedTalk about origami by Robert J. Lang.

And oh, before I forget, O is also for opportunity.

Want to win this little origami pocketed holder I folded and filled with a few paper treats? 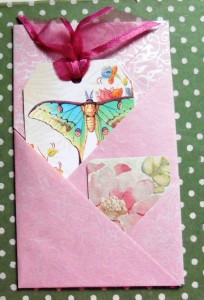 Leave a comment and I’ll toss your name into a hat.  While I wish I could say it was one of these wonderful origami-like creations of Jean Hicks from Erratica Hats, alas you’ll have to settle for having your name temporarily rest in a somewhat more prosaic chapeau.  I’ll pick a winner on Monday.

So tell me, what does O stand for your world?  Are you a paper folder?  A hat wearer?  Have an opportunity you’re considering; a story to share?  Leave a comment – you know I love to hear.