You are here: Home » Pay It Forward Art-making Project for 2014

Pay It Forward Art-making Project for 2014 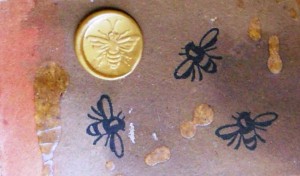 Is this the beginning of the next iteration of Honey Money?

Last night I was straightening up my prosperity altar and as always I smiled when I came to my little pile of money consisting of a million dollar bill and several of my Bee Bucks/Honey Money.  I’m thinking it’s time to print a new denomination of currency for WeberWorld and I went to bed with visions of possibilities.  I had a wonderful dream about how there was no more boring-looking money anymore and we all paid each other with the most fabulous moola imaginable.  Colors, textures, scents – there was even singing money and money with wings.  I want some of that please!  I was at an art fair and the method of paying for something involved opening your wallet and the seller would select from the artful currency you were carrying which piece most appealed to them.  How fun is that?

But in any case I was further amused when this morning I found a post on TwinkleToes2Day’s blog about Pay It Forward Art-making Project for 2014.  I thought it sounded like fun so of course I want to play.  These are the rules, which clearly sound like they originated as a FB meme, but consider them converted for blogging purposes:

I promise to make a small work of art for the first five people who comment on this post and say “YES, I want in”. A ‘like’ alone is not enough of a commitment, nor is a comment about thinking Pay It Forward is a great idea. You must in turn post this as your status update and make something for the first five who comment on your status. The rules are simple: – It has to be your work, made by you, and the recipient must receive it before 2014 ends. – It can be anything art-based: a drawing/illustration or a conceptual work of art, a photograph, a knitted item, cross-stitch, paper maché – or anything in between. I’m paying this forward thanks to Mo aka TwinkleToes2Day.

PS. It doesn’t matter if you aren’t an artist, try something out, google/ YouTube how to make stuff, step out of those boundaries.

I really do hope you’ll play along.  Mo says she’ll be sending out postcards to her players.  I’m not sure what I’ll do – perhaps little journals, or maybe an origami wallet with some of my freshly minted currency, or maybe I’ll bead a bracelet or felt a flower.  So many possibilities – so much fun!

Have a pay-it-forward story to share?  Make your own money? Had any fun dreams lately?  Do tell – you know I love to hear.