You are here: Home » Penguin Parade 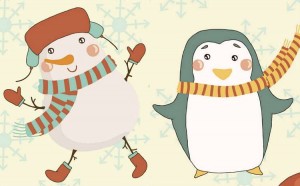 Oh this old man winter – always playing jokes.  Instead of finally packing up and calling it a wrap, he thought he’d give us another dose of shoveling and snowball making opportunities.

So what’s there to do except meet it all with a laugh, get another round of hot chocolate ready, and maybe think some about penguins.

Earlier this week I saw a rather widely spread FB story about the New Zealand Wild Life Clinic who put out a call for knitters to knit tiny sweaters for penguins who had been rescued following toxic oil exposure. Turns out the story is a few years old and the clinic is no longer in need of knitted donations; but it’s a heart-warming story in response to a heart-breaking situation.  You might want to take a peek at pictures of some of the rescued penguins in their fancy duds.  Or given that penguins normally dress so formally, perhaps this is the equivalent of working-in-your-jammies for them.

I have a pair of formally dressed penguins hanging out in my kitchen – one dressed as a waiter and the other holding a lovely rose.  They’re about forty years old and they’re actually whistles.  And they make me smile each time I pass them. 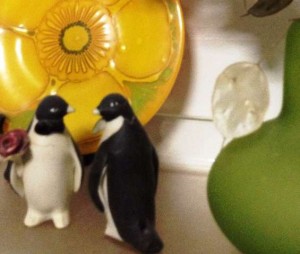 Whistles aren’t the only musical association I have with penguins.  Some time ago I was researching a musical instrument I hadn’t heard of before – a harmonium.  And the search turned up a reference to a musical composition created and performed by Penguin Cafe Orchestra. Although that particular composition isn’t one my favorites, here’s one they did that I like better called Perpetuum Mobile.  Perpetuum mobile is actually a musical term, but I’ve always thought it should have been Alexander Calder’s theme song.   How cool would that be?

Since my mind seems to be waddling all over the land of penguins, I’m pretty sure we need to give a tip of the hat to one of Batman’s archenemies, Penguin.  I totally give him credit for my long-standing desire to have a wardrobe of trick umbrellas.

But lest we end up with less than flattering thoughts about penguin, let’s return to honoring our well-dressed friends with a peek at their totem medicine. Wildspeak.com is an on-line resource that can be a helpful starting point when you’re beginning to investigate animal symbolism.  Here’s some info on Penguin.

Now your turn.  Has winter left the building in your part of the universe?  Would you be happier in fancy formal wear or a wardrobe of sweaters? Have a theme song?  A favorite comic villain?  Own a trick umbrella?  Do tell – you know I love to hear.