You are here: Home » Pieces of Peace 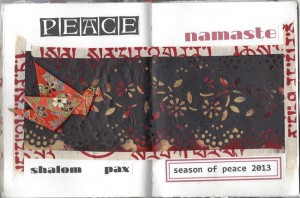 It’s Tuesday which means it’s time to take Artysville’s Glue It invitation.  I did a little journal spread on peace.

This week concludes the annual 64-day observation of the Season of Peace and Nonviolence.   The purpose of the “season” is to create awareness of nonviolent principles and practices as a powerful way to heal, transform and empower, while offering reminders that every individual can contribute to moving the world in the direction of peace through their daily actions.  The “season” itself was chosen to span the dates marking the anniversary of Mahatma Gandhi’s assassination (Jan. 30)  and Martin Luther King Jr.’s assassination on April 4).

I like the premise of this kind of practice.  The peace and nonviolence part of it are obvious attractions, but I also like the emphasis on the individual making a difference in their own life and then community and then world.  It’s an emphasis on unity consciousness and I believe that’s clearly what we’re here to live and practice.

I often think about these words of Hafiz:

I have come into this world to see this:

the sword drop from men’s hands

even at the height of their arc of rage

because we have finally realized

there is just one flesh

I want for us all to understand that.

It’s always a delight to see kids operating in this way.   We certainly have a long way to go in our socialization and educational processes because we keep encouraging/demonstrating/demanding the opposite.  But I’m hopeful one day we’ll get it.

I like this little video of the Agape Children’s Choir performing Lennon’s Imagine.

Yes, let imagine.  And then let’s make it happen.

Do you have a vision for peace?  Or is there a song or a poem or something else that inspires you?  Do tell – I’d love to know.