You are here: Home » Poppies 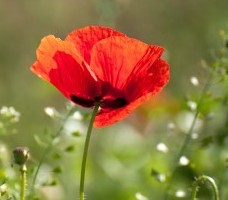 I’m sorry I didn’t know about Lori Moon’s May Flower challenge earlier because I certainly would have played along all month.  However, I’m delighted to slip under the wire and celebrate one of my favorite blossoms.

The poppy opes her scarlet purse of dreams.    — Sharmel Iris

I’ve been starting my mornings lately by doing a one-card draw from any one of the many oracle/tarot decks that I have.  I like the idea of gently holding a focus and seeing how it unfolds during my day.  On Monday I chose to work with Isha Lerner’s Power of Flowers deck and drew the Oriental Poppy card. 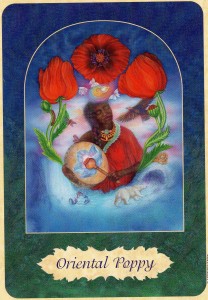 I happen to love poppies and it delights me that my neighbor has a stand of them next to my back sidewalk.  So I knew I’d be inspired to go out and take some photos.  But I also smiled at the significance of drawing a poppy card on Memorial Day.  I knew the reference to the poppy from the In Flanders Field poem, but I hadn’t realized that Moina Michael conceived of the idea in 1915 of wearing poppies on Memorial Day, nor her role in founding the National Poppy movement.  (How I love the power of on-line research!)

Of course poppies have many more associations than remembrance – particularly Oriental poppies are connected to sleep, dreams, and narcotic relief.  I recently learned that ancient Egyptians adorned the mummified remains of their privileged with poppies to ensure pleasant dreams in the afterlife.  And there’s the story about the other Greek gods feeling such compassion for Demeter’s distraught anguish over the disappearance of her daughter Persephone that they commanded poppies to spring up on her path.  When she stopped to pick one she fell into a deep blessed sleep.

And then there’s the wonderful poppy scene from the Wizard of Oz.  I confess it’s one of my favorites.  As a child I once played a field poppy in a dance recital.  Of course now I understand it was the perfect role for the less-than-inspiredly-talented dancer that I was, but I didn’t care as I had the best costume headpiece ever!

While poppies themselves are beautiful, I love pods and seeds as well.  I often use the pods in my art – I particularly love them as “heads” for my tiny bottle women.  I consider them to be a perfect shape, and I especially love that they have all those seeds rattling around inside like a genius brain full of ideas.  And I can never really look at a poppy and not think of my Grandmother who was an extraordinary baker.  Her poppy seed roll cake was divine.

Just as I celebrate the poppy, I hope your May has been filled with flowery delights as well.