You are here: Home » Random Musing: E is for…

Random Musing: E is for… 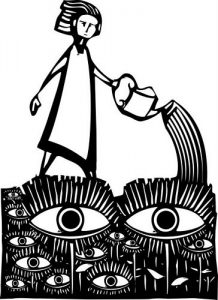 Today’s musing is about eyes.  Blame it on the dream I awoke from this morning – a garden of eyes pointing me in the direction of a lone tree in a meadow – a tree with eyes in its bark.  I’ve been contemplating that dream off and on all day.  And thinking about all the ways eyes have always intrigued me.

Back when I was a teenager I was queen of color.  I was forever painting my bedroom furniture and dying my sheets.  One day I was working with a dilute bleach solution and happened to splash it in one of my eyes.  I rinsed and rinsed and rinsed, and thankfully no damage was done.  But I had the craziest thought that maybe when I next looked in the mirror my once brown eye would be a curious shade of tan.

I have a thing about mismatched eyes.  Ages ago an onine friend commented that she had noticed in one of my self-portraits my eyes are slightly different.  Since we’d never met in person, she was wondering if that was really the case, whether it was artistic license, or what the scoop really was.

In reality my eyes are pretty much the same.  But it’s true I always deliberately make them slightly different in my self-portraits.  I do this as a tribute to my older sister who died when I was in my 20s.  She had amazing eyes.  Color-wise they were an artist’s dream (or nightmare) – that unnameable shifting gray-green hue that no amount of paint mixing can capture.  But even more intriguing to me was the fact that there was a slight, but noticeable difference in their shape.  I found it utterly fascinating.

As I got older I began to take to heart the metaphor message of looking at things with different eyes.  And I always counted on my sister to see things differently – to be able to offer me the slightly variant perspective.  Was it the wisdom of an elder sister?  Perhaps.  But there’s no disputing she was seeing with different eyes.

Now when I do self-portraits I always alter one of my eyes as a tribute to her.  A reminder of my connection to her, and a little inside joke that I’m keeping my eye on her and know she’s watching me too.  But mostly it reminds me to honor the fact that I see things differently.

John Dalton certainly thought we saw differently based on the color of our eyes.  Back in 1794 he published a paper entitled “Extraordinary Facts Relating to the Visions of Colours.”  In it he posited that because he had blue eyes, he had lens liquids in his eyeball that were tinged blue.  He further thought that because of this people with blue eyes couldn’t see the color blue in nature exactly the way others who didn’t have blue eyes could.

Another color curiousity: after my mother had a stroke, one of the cognitive impairments she suffered was quite peculiar – she began seeing crows as white.

My father had a different vision issue. He had very severe macular degeneration – the condition where the center of the visual field is affected so images become blurred beyond recognition.  It’s like having great holes in one’s field of vision, so in time only peripheral vision exists.  Because he also later suffered from Alzheimers, I came to wonder exactly what he was seeing, and began to think of his holey vision as perhaps holy vision.

My dream about the eye flowers also had me thinking about potatoes.  Yeah, I know – what can I say?  My brain loves to meander over a whole lot of ground.  Why are potato sprouts called eyes?  And doesn’t it make you wonder if potatoes are busy keeping an eye on things underground?  What do you suppose they see?

What do you see? What color lens are you using? What are you keeping your eyes on?  Do tell – you know I love to hear.