You are here: Home » Random Musing: K is for…

Random Musing: K is for…

Today the letter K has me musing about Klimt.

I have a hard time imagining someone not loving his art.

I suspect he was quite a fascinating man as well.  Photographs and portraits of him certainly capture someone who looks intriguing. He was a founding member of the Vienna Secession in 1897, which was a movement to provide exhibitions for unconventional young artists and to bring foreign artists to Vienna as well.  The group held Pallas Athena as their symbol – she who was goddess of the arts, wisdom, and just causes.

I have a print of The Kiss which I adore.  The original is over 5 feet by 5 feet, but mine is somewhat smaller with the frame being about 4 foot tall.  Still it’s very impressive, and I stop and look at it every day. 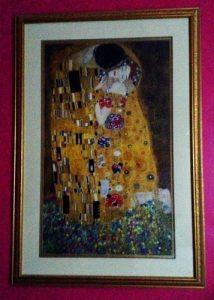 Earlier this year I watched the film Woman in Gold, starring Helen Mirren. She portrayed Maria Altmann, who fought a long hard battle to get a Klimt painting returned after it had been confiscated from her family by the Nazis.  The painting commonly known as The Woman in Gold, was actually entitled Portrait of Adele Bloch-Bauer 1 by Klimt.  However when it was stolen and later displayed by the Nazis, they did not want it referencing a member of a prominent Jewish family, and so re-titled it Woman in Gold.  Six decades after World War II, it was finally returned.

I also have the fabulous Golden Tarot of Klimt – it’s a gorgeous deck with lots of gold-leaf decorating it.  Bulgarian artist A. A. Atanassov is credited with the artwork – he was inspired by Klimt’s work and many of the cards are close copies of Klimt’s originals while others are similar in tone but don’t correspond directly to any of Klimt’s pieces.

It truly is a lovely luxe deck, a befitting tribute to Klimt. 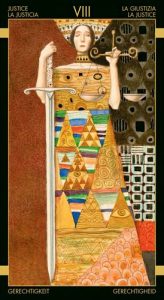 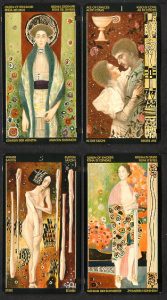 What “K” is inspiring you today?  Wishing for a golden period like Klimt had? Have a movie to recommend?  Do tell – you know I love to hear.