You are here: Home » Return to the Counting House: September 2013

Return to the Counting House: September 2013

Well it’s official.  I declare September was one strange and often wonderful month.  I frequently say one of the things I’m best at is paying attention to the everyday sacred, and September gave me plenty of opportunities.

Since I find the ritual of closing out the old before opening the new so helpful, playing monthly in Julie Kirk’s My Month in Numbers is proving a fun invitation.  I’ve been doing this for a few months, and now it feels like the real experimenting begins.  What things do I want to count?  I’m definitely a let’s-see-what-shows-up kind of person, so it’s fun for me to see what unfolds without being too rigid in my categories.  But with approach I feel like I missed some things that might have been fun to count this month.  Maybe next time I’ll be a little more deliberate in my categories.  Do consider playing along yourself and stop by Julie’s site and see how others have counted their September as well.

Nu Kua, the Chinese creatrix goddess who invites us to create divine order in our world was my mentor for the month.  She’s associated with dragons, compasses, and one creation story has her creating humanity by breathing into clay vessels.

With her overseeing things I thought my month was going to be one of organizing and house projects but that’s not really what turned up.  All the re-ordering seemed to be internal.  Some gentle tweaks and some big paradigm shifts.  But whether big or small, integration of changes seems to be happening quickly – as though we’re all getting better at staying on our feet while the world shifts around us (or maybe that should read staying on the dragon when we’re getting taken for a ride).  At least that’s how it felt for me this month.

The month also felt very clearly divided for me – pre-Equinox and post.  With the turn of the seasonal wheel I felt a big push forward.  In my energy, with my intentions, and especially with some new understandings.  And very much the sense that what’s behind us is behind us now.  With the implicit admonition to quit looking back.  That and seriously letting go of judgment were two major focuses I’m claiming as September’s encouragements.

With all the internal attention this month I found balance with an exceptionally active connection with others.

Communal count:  (As part of the monthly count challenge Julie comes up with a couple ideas everyone playing can count – hence the term communal count.)   One of this month’s questions:

How much does a pint/litre of milk cost where you live? And how much did you buy this month?

This totally required me to put on my thinking cap, google conversion rates, and use the calculator.  I so don’t understand why the U.S. hasn’t converted to the metric system!   But in any case, I bought 3 gallons which works out to 11.34 litres.   I pay $6.59 a gallon, which works out to $1.74 litre.   But I will point out that I pay a premium price for milk because I insist it be organic, antibiotic-free, rBST hormone free.  Unfortunately milk in the U.S. does not have to be labeled if it contains rBST which is a hormone given to cows so they produce more milk.  I doubt if it’s all that healthy for humans to consume, but it certainly doesn’t feel right to me to subject cows to such treatment, and it’s banned everywhere else except here.  Sigh.  If I were to buy unlabeled milk the average cost in my area of Chicago is a little less than $1 a litre.   So there you have it – my milk money chronicle.

Finally, here’s a page of autumny bits that made their appearance in my mailbox this month.  And because the universe loves playing along, you’ll see that a vintage milk bottle cap showed up for me this month.  How apropos is that? 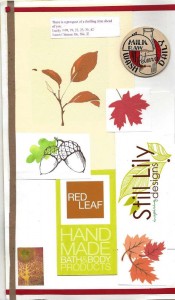 Your turn.  What did September bring you? What do you count on about autumn?  Are the leaves beginning to turn colors where you’re at?  Did you know an anagram for September is Pet Embers?  Kind of makes me want to build a bonfire.  What about you?  Do tell – you know I love to hear.