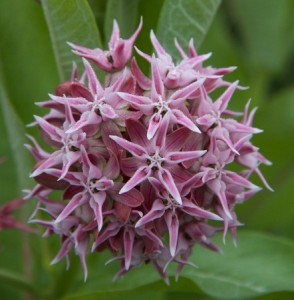 Day 2 of Kat McNally’s Reverb14 asks us to reflect on this prompt:

What unfinished projects from 2014 am you willing to release now? (Regret not required.)

Oh the resistance and internal stories around this invitation!

The truth is I love having multiple things going on – it fuels me and everything seems all the richer for the cross-pollination.  So letting go of projects is not something I embrace with ease and grace.  It’s also true that I have a billion ideas and even I, stubborn as I might be, understand that I can’t do everything in any given time.  But that’s what they make idea journals for – capturing all the juicy inspiration and keeping it on hold.

Some time ago I uncovered an idea journal that I hadn’t seen in years.  What a delightful find.  Here’s a peek at it. 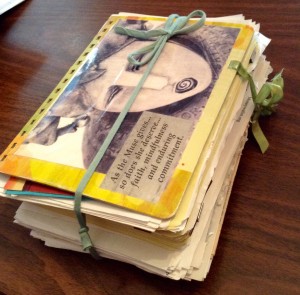 Just the sight of it delights me.  Battered and worn and stuffed beyond belief – filled way beyond capacity and therefore needing to be tied.  But oh, the fabulous ideas that are housed in there.  To give you an idea of how much I treasure my idea books, it’s with only a small amount of tongue in cheek that I call them Idea Reliquaries.  Some of the ideas are as sparkly now as they were when they first occurred to me.  And some feel more like core seeds that I’m a few generations from at this point, but I can so see the connection.  And of course there are some ideas for projects that just don’t delight me anymore.  The energy isn’t there.  Now those I’m willing to release.  But even thinking about that makes me smile at myself.  I’m willing to release an idea for a project that I haven’t yet begun.  I don’t think that counts for much of a release.

Digging myself deeper into this thought trench I started arguing with myself saying that perhaps I could consider this prompt later in the week, after I’ve had my scheduled day of planning for business.  I have so many ideas for that as well, but I’m hoping to be disciplined at the beginning of the year and outline at least in general terms what I want to focus on so I can block out my calendar.  Clearly some ideas will have to be released because they won’t all fit.  But not getting them on the calendar doesn’t mean I’m ready to release them either.

So you see how slippery this is for me?

I don’t want to release projects, just push them into the not-yet-completed pile.  I can laugh at myself about this, but I can also wonder about the graspiness of it.  The greed of having a stash of projects so large that I can’t possibly get to them in a reasonable amount of time.  I wonder what this need of surplus says about my fear of creative drought.

Rather ironically one of John O’Donohue’s poem showed up for me today, and this bit is so relevant:

In the out-of-the-way places of the heart,
Where your thoughts never think to wander,
This beginning has been quietly forming,
Waiting until you were ready to emerge.

For a long time it has watched your desire,
Feeling the emptiness growing inside you,
Noticing how you willed yourself on,
Still unable to leave what you had outgrown.

There are so many things I released this year. So many places I recognized that this-doesn’t-fit-who-I-am.  But here I sit struggling, actually struggling, with even coming up with a project to release, let alone committing to it.

And so I will be gentle with myself.  I’ll rework the invitation into something that feels expansive for me.  I’ll ask myself simply what am I willing to release now?

Now that I can lean into.  I would like to release perfectionism in favor of more productivity.  I’m thinking of holding that loosely as part of my manifesto for 2015,  It feels like a big challenge – could I give myself a year of good enough and still feel really wonderful about the work I do?  I don’t know.  I do know that fear sometimes wears the disguise of perfection and I’d like to be able to see through that. And so that’s a good candidate for release.  One that I’d have no regrets about whatsoever.

By the way, the photograph at the top of the post is a closeup of purple milkweed.  According to floriography, the Victorian language of flowers, butterfly weed also widely known as milkweed meant “let me go.”  And so I thought it would be an appropriate symbol for our topic today of release.  I’d like to open my hands like those petals and release all that I’ve ungrown with perfect ease.

And what about you?  What are you ready to release?  Do tell – you know I love to hear.