You are here: Home » Savory

Today, the first Saturday in May is designed Herb Day, an annual celebration started by a group of five nonprofit organizations to raise awareness of herbs.   The International Herb Association declared Savory to be the herb of 2015, so I thought today on Herb Day, I’d talk a bit about savory. 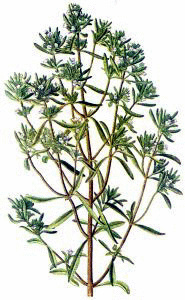 Although now almost exclusively used as a culinary herb, it does have a history of medicinal use as well.  But for modern cooks it’s probably known most as one of the ingredients of the seasoning mixture known as Herbes de Provence.  (While there are many versions of Herbes de Provence, I like blending savory, marjoram, thyme, rosemary, and lavender flowers.)  I find it amusing that savory, which grows in abundance in Provence, is also known as donkey’s pepper.

The etymology of savory is Old English (saverey), tracking back to Latin “satureia” where the herb was associated with satyrs.  Given this association, Pliny noted that summer savory was an aphrodisiac but winter savory acted as a libido depressant.

The Romans introduced savory to England, and it was grown in gardens of the wealthy. There are suggestions garlands were worn as crowns with the idea that the aromatic herb would prevent drowsiness.

Savory was dried and used a strewn herb, meaning it was scattered as an aromatic.  It’s been used in perfumes, tea tonics, and as an ingredient in May Day wine.

The taste of honey is affected by the pollen and nectar of plants the bees gather from, and so savory was a popular herb to plant near beehives, Doubly so because it’s said a poultice of the leaves can alleviate the pain of bee stings.

Other medical uses for savory include digestive disorders and sore throats,

Today while I was getting my haircut my cutter mentioned she’d made the honey vanilla tea pancake recipe I’d shared with her a while ago.  When I got home I looked it up again and was amused to find that the article offers recipes for sweet and savory pancakes.  And while none of the savory recipes actually mention the ingredient savory I don’t see any reason why it can’t be added.  And in honor of this year’s herb, I have no doubt I’ll be making savory savory pancakes sometime.

What about you?  Have a favorite herb?  Do tell – you know I love to hear.