You are here: Home » Should Only Pennies Be Pretty?

Should Only Pennies Be Pretty?

Poking around in my treasury of random oddities and wonder (as reported here) I discovered January 25 is paper currency day in the U.S., honoring the establishment in 1862 of Legal Tender Notes aka United States Notes.

That IS an odd fact to be noting in one’s journal, and you might well ask what it was doing there.  I can’t be sure (and that’s part of the fun of deciphering old brain trails), but I think I was musing about money in connection with the movement initiated in the 90s by mailartist Julie Jefferies aka ex posto facto.  Fluxus Bucks were exchanged through the global network of mailartists, and those who received Fluxus Bucks were asked to modify them in some way before passing them on.  So in truth, each “buck” had added value every time it was moved back out in the stream.

Now there’s a concept that delighted me back then and something I still think about.

I like to think I do my small part to add value to our “official” currency.  I work with it very intentionally.  I energetically clear all paper money that comes to me, and I bless it all before sending it out.  In the scheme of things it’s a pretty tiny thing, but still, it delights me to know that I’m sending out happy joyful money into the Universe.

But even so, I have to say I’m pretty sure money would be a lot happier and much more fun to handle if each bill were a colorful bit of traveling art. Why ever not?!  Take a peek at this site with photos of some colorful currency.  Half way down the page is one of my faves – the Dutch sunflower (with a bee!) guilder.  It’s not in circulation any more having been replaced by Euros, which makes me a bit sad.

A world without bee currency is missing something, and to address that important need I’ve created the first run of Honey Money.  No need for any specific denominations, this Bank of Prosperity note is valued at “more than enough.” 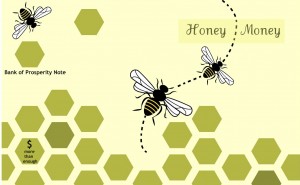 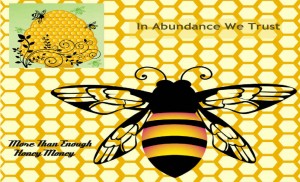 Because I believe in sharing the wealth, if you’d like your own Honey Money let me know and I’ll send you one.

And if you’ve got your own ideas about currency designs, names, or necessary money mojo please do leave a comment. I’d love to hear.  Who knows, maybe the next issuance from my Bank of Prosperity printing press will pay tribute to your financial wizardry.