You are here: Home » SOC 5: A Case of the Strange and Magical

SOC 5: A Case of the Strange and Magical

I’ve been having a strange and fabulous day.  I’m pretty sure I stepped through a magical portal of some kind.  Perhaps it has something to do with the new moon, and those photos of the heart-bearing Pluto, and the fact that I’m still celebrating my birthday month, and all manner of other wonders.  But here’s what’s happened so far…

They’ve been doing all kinds of infrastructure work in our neighborhood, and literally for many many weeks now we’ve had heavy equipment on our block digging away every day starting at 7 a.m.   My morning routine of coffee on the front porch has been cut short all summer as the noise gets to be pretty oppressive quite quickly.  But today we were able to sit and watch for a longer than usual time, being entirely mesmerized by what was going on.  The huge digging machine is digging deep – I’m thinking it’s at least 15 – 20 feet down and lifting out huge shovelfuls of dirt and flat slabs of concrete.  It simply boggles my mind.  I’m imaging all kinds of scenarios where there would be underground sidewalks that are now being torn up, and passageways dug to the center of the Earth; and part of me wonders in both a literal and metaphysical way if the very underpinnings of our physical world is being shifted.  I might have stayed longer to watch and ponder but I had to leave for a dental appointment.

Walking out back to head to the dentist a few blocks away, I passed the garage where I have a patch of  Dragonflowers growing.  While I love them, the truth is they’re prolific growers and they kind of make the area back there look like a jungle, having grown tall and spreading everywhere.  Thinning them out doesn’t seem to do any good – overnight they seem to make up exponentially for any cutbacks.  So I consider them somewhat magical to begin with – after all they ARE dragons.  But I literally stopped in my tracks this morning because they just started popping their first flowers, and they’re yellow instead of the pinky purple they’ve always been in the past.  How is that even possible?!  I know theoretically if flowers are hybrid, genetics can revert so I suppose there may actually be a scientific explanation for this phenomenon. But frankly I don’t actually care.  All I know is my flowers have magically changed color.

I kind of floated off to the dentist pondering that little bit of awesomeness, only to arrive and find out that my appointment isn’t until next week.  Not only did I have the wrong date, but the appointment next week isn’t even on the same day of the week or at that particular time.  I don’t know what planet I was visiting when I wrote it down on my calendar.

Later I headed out to pick up my new eyeglasses, and getting there requires a trip on one of my favorite bus routes.  I always see something magical.  The route is in a pretty ethnically diverse area that happens to be a sort of welcoming ground for new immigrants arriving from many cultures, and I never fail to see at least one person in some sort of traditional garb. It delights my artist heart immensely.  And today it felt like I was on a magical love bus.  There was an elderly woman, a Babushka, looking like she stepped directly out of a Russian storybook, grinning broadly and speaking on a cell phone in a mixture of Russian and English, and she ended the conversation by saying “I love you” at least a dozen times.  My heart practically burst open it,  A younger woman, I believe from Jamaica, came aboard plugged into her music and humming softly, but before the ride was over, she jumped up and started singing and dancing to a reggae love song, and the whole bus was enchanted and clapped afterwards.  I’m not sure how many metropolitan buses you ride on, but having an entire bus enchanted is not an everyday occurrence I can assure you.  There was love in the air for sure.

And finally when I returned home, it was to the still noisy boom boom boom of construction.  It was relentless and I was just feeling the edge of a headache coming on, and suddenly out of nowhere someone shows up and starts playing a saxophone.  How crazy wonderful unbelievable is that?!  And suddenly the construction noise doesn’t seem disharmonious at all.  It feels magical.

So you can see why I’m over-the-new-moon delighted with this crazy beautiful day.  It’ll certainly be something I document in this week’s Summer of Color journal I created.  This week’s palette was two oranges and a blue.  Which to be honest didn’t exactly make my heart sing.  Orange may be my least favorite color.  And yet, being the magical day that it is, I managed to find a couple oranges in my stash that I think look pretty good paired with my blue.  One of the parameters I set for myself in this challenge was to use at least one piece of handmade paper in each journal and I broke that rule this week.  But I’m entirely pleased with the blue paper I did choose, and I can say that it was most definitely altered by me.  It’s a piece of sandpaper.  Which I dipped in fabric dye so it’s that lovely color of tropical water.  I’ve experimented a lot with dyeing sandpaper and truthfully this was the only success of the bunch.  But a very nice success wouldn’t you say? 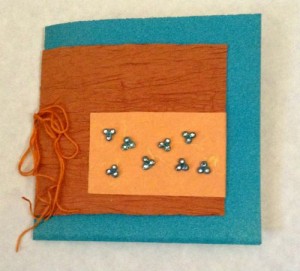 The other parameter I set was using some sort of flower embellishment, thereby turning these Summer of Color journals into my “garden series.”   So I used these funky little rhinestone-centered vintage beads, and created a sparkly field of flowers.  Because I think all magical gardens should have sparkle-centered flowers don’t you?

So there you have it – a walk through my magical day and a peek at my journal.  Did something magical happen for you today?  Ever been on a love bus?  Wonder if you’ve stepped into another world?  Do tell – you know I love to hear.