You are here: Home » Surprises

“The magnolia in our front garden went crazy this Winter. Ordinarily, I wouldn’t think it worthy of mention — even though it stopped me in my tracks every time I walked out the front door — but, to be honest, up until that point I had given up on it.

It had been looking so straggly the past few years, I just assumed it was past its prime and that it would be just a matter of time before we needed to make a decision re: chopping it down. The wild blooms felt like a beautiful reminder that things we’ve given up for dead may still surprise us with a new lease of life.

What surprised you this year?”

Ah the magic of Reverb!  This prompt feels like a wonderful gift to begin the deep looking at my year which has felt like such a curious paradox – both heart-expanding and incredibly wobbly.

Let’s start with the hard.  I’ve been surprised at how sad I’ve felt this year.  Not just in response to global and national issues, but some personal things as well.  There was the surprise loss of our sweet kitty Jupiter.  Followed by the loss of a beloved family member.  And while his death wasn’t a surprise we were unprepared for, the dance of grief always holds its share of surprises.  I think that’s the nature of hearts that are broken.  It takes quite some time to find a steady rhythm again.

But there were plenty of other surprises as well, ranging from the downright curious to the simply enchanting.

In the surreal category, this summer I happened to glance out the window at the exact moment when two guys were riding down the street, side by side, on identical very strange bicycles.  They were oddly sized small bikes, and the spokes of the wheels were painted in a shade of hurt-your-eyeballs acid green.  That in itself was curious, but add to it the fact that they were riding very, very slowly – slower than I thought possible to actually keep moving forward balanced in a straight line.  And trailing a few steps behind them was a guy with a large walking stick, pounding it on the ground like he was tapping out a rhythm.  I have absolutely no clue what it was all about, but I’ve managed to create an elaborate story about travelling circuses.

Another surprise was the unexpected phone call from someone I hadn’t heard from in probably at least ten years.  That would be surprise enough, but the call itself was exceedingly strange.  By the time we had hung up, I was left wondering what exactly had just happened.  And when the image came to mind of two pool balls rushing towards each other and then bouncing apart at impact, I was surprised and yet understood that was the perfect analogy even if I didn’t understand the whys behind it.

There were lots of lovely surprises as well.  Like the period of several days where the goldenrod blooming in my garden became a bee magnet of a magnitude I’ve never experienced before.  I was literally gobsmacked at how many bees, of many various types, swarmed those blossoms from early morning until late afternoon.  I was mesmerized and spent untold hours delighting in the magic of it all.  I felt like I was drinking up a great balm for my heart, just as the bees were drinking up nectar and dusting themselves in pollen.  What a delicious experience.

And I’ve also been delightfully surprised that the plants that spent the summer and early fall in our porch planters, are doing so well having been repotted and brought indoors.  Against all odds, the tiny Japanese roses are still blooming!  I’m not entirely sure they’ll make it through the winter, but for now I’m delighting in the magic.

I’m constantly surprised, and usually delighted by my dreams, and I’m very appreciative for that.  One of my faves was when a tiger morphed into a bee so it could be small enough to whisper directions in my ear.  It was offering instructions on how to be happy.  How fun is that?

I received a number of wonderful surprise gifts this year, including this print of a Jack Kerouac quote. 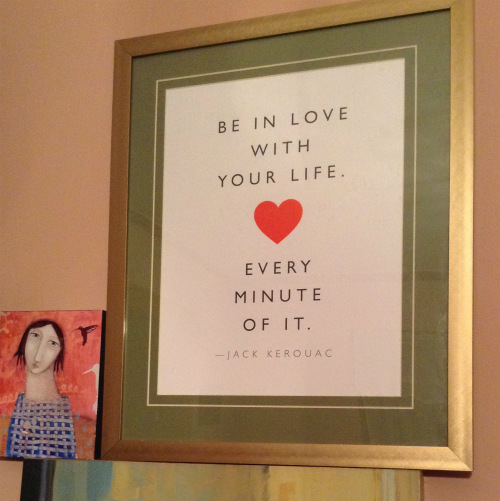 And isn’t that the most perfect invitation?

So tell me, are you loving your life?  What surprises popped up for you in 2015?  Do tell – you know I love to hear.  And do consider playing in Reverb15 if you’re inspired, and/or take a look at how others are responding to this prompt.  More is always merrier.