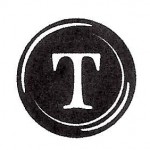 In my dream last night my husband and I were talking about how things don’t always develop as expected.  For example, weren’t all the great/terrible sci-fi movies of the 50s and 60s convinced that we’d have walking talking ready-to-do-anything, dispense-your-wishes-at-your-command robots? That hasn’t happened.  True we have ever-more sophisticated computers doing way more than those tin can robots promised, but still.  No robots.  Things moved along a different path.  We took a moment to be ever-so-slightly disappointed, but optimism kicked right back in and my husband began to wax poetic about the 3D printers.  And how if you think about it they’re way more amazing than the mind can almost bear. And is the way of dreams, we began hunting through the house convinced we had one.

But instead of finding a printer, I found, sitting in place of my laptop, an old beat up typewriter.   It had seen a lot of hard use, but it was radiating satisfaction and love, and I imagined some famous author had pounded out a lot of wonderful works on it.   When I sat down and put my fingers on the keys to test it out, the first thing that popped into my head to type was “Tulips from Tupelo.”  And the second I had that final o typed out, up pops a tulip from the paper carriage.  I couldn’t believe it and I was so excited and delighted.  So excited in fact I woke myself up.

And alas there’s no magical typewriter dispensing tulips here.  That I can find.  Yet.

But it did inspire me to capture the image for today’s index card for the ICAD challenge. 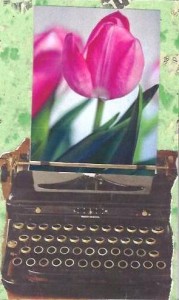 And I thought a bit about typewriters.   I had a strange job when I was in college at a huge insurance company.   I was part of a giant typing pool, working the second shift until midnight.    Every time I stepped into the building I felt like I was transported back in time – everything just felt “not current” and slightly surreal.  I was always expecting to hear Twilight Zone music.   And everything was really regimented.  There was actually a scheduled break once a week where you were required to take the type element ball out of the machine and wash it.  With a toothbrush.  At your assigned time.   And for heaven’s sake don’t even think about having fun.  I believe we were required to check that at the door.  Sometimes I’d sit for a moment when things got busy and just listen to the sounds – it somehow made me think of a giant humming beehive.  But the bees there weren’t happy.  You never heard any laughter. And then at midnight I’d step back out the door into the real world again.

Another typewriter memory:  poet Maya Stein’s Type Rider project last year, where she hauled a typewriter behind her as she rode across country, stopping in communities and asking people to contribute to a collaborative poem.   Seriously, how cool is that?   She blogged about the 40-day adventure and you might want to poke around see what she had to say.

What about you?  Have any typewriter tales?   Have you ever seen a 3D printer?  Had a Twilight Zone job?  Been to Tupelo?  Love tulips?   Do tell – you know I love to hear?