You are here: Home » The Pull of the Full Moon

The Pull of the Full Moon

Traditionally each full moon was named by a culture reflecting something that was happening in the seasonal wheel for that particular group.  Carrying those names forward into our time, into a culture that doesn’t always celebrate the same things often feels a little odd to me.  So while this moon is often called Sturgeon Moon, I don’t really feel the resonance of that.  So I usually lean into Corn Moon or Hay Moon or Lightning Moon.

Some months I name the moon based on my own observations or particular events happening and that’s always fun.  That’s what I decided the other day when I was out in the yard, passing the garage and saw how in a matter of days the vines had covered the structure in a beautiful dense pattern, in lush abundance like I’ve never seen before.  I decided this was Full Vine Moon.

And I confess to be surprised and somewhat delighted when I discovered that actually this IS known by some as Vine Moon.

But no matter what name we choose, this particular full moon feels like a gateway to some powerful energetic times ahead.  Soon we’ll be heading into the autumn equinox and the next eclipse cycle, and I can feel the subtle shifts in my own energy.

No need to get ahead of ourselves though – things will unfold perfectly and our only real job is to be present now.  And so now I’m celebrating this full moon.

I made a vision board today.  I don’t often do them at the full moon – I tend to set my lunar cycle intentions and plant seeds at the new moon.  But as we’re about to enter the final third of our year (!) I’m feeling called to do some additional visioning and review.   Are you feeling the pull of that also?

It might also have to do with the fact that I’m in my Power Wishing Period, which according to Jan Spiller’s New Moon Astrology is the annual period, based on your birthday, when it’s most efficacious to make big wishes.  Truthfully I’m not sure I believe one time is more advantageous than another, but I CAN say it’s powerful to gather your wishes/intentions in one place and then review them year by year.  I’ve been doing this practice for many years, and it’s always interesting to see what I’ve manifested and what I haven’t.  And I find it particularly valuable to see what’s been on my list for a while – that’s always an invitation to see if I really want to commit to it again or if it’s time to let it go.

But back to the full moon… I received this fabulous CrankBunny moon paper puppet doll for my birthday last month.  Isn’t she precious with her, with her fold-out accordion that reads “my work is loving the world.” 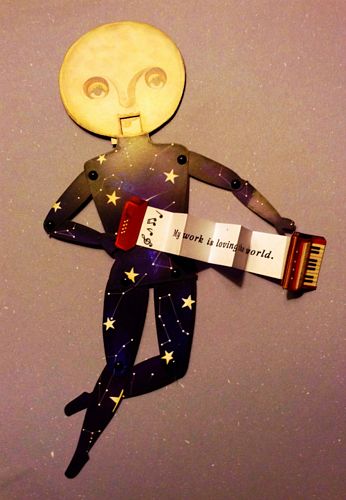 I find this moon tarot card from the Deviant Moon Tarot curiously charming as well.  In this case, the moon is holding the strings on the people puppets. 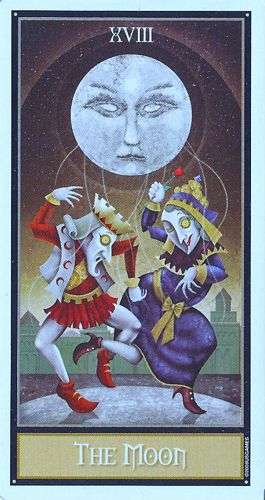 In this watery time of the Pisces full moon, I certainly feel my internal tides being pulled.  And I most definitely feel as Anais Nin wrote:

“I’m restless. Things are calling me away. My hair is being pulled by the stars again.”

What about you?  Are the stars and moon pulling at you?  Made any wishes lately?  Have a favorite moon card from a tarot deck you love?  Know how to play the accordion?  Do tell – you know I love to hear.