Thursdays rank up there in my favorite days category, especially since discovering Nerd in the Brain’s weekly invitation to do a Three Things Thursday post – a gathering of “three things that make me smile: an exercise in gratitude.”   I have no trouble getting  behind that.

Today let me do a little show and tell of some fabulous things that recently made their way into my life.  First is my new Mercury/Hermes ring. 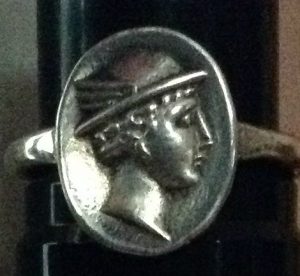 I had to take it off to get a decent picture of it, but I had it sized so I can wear it on my pinky finger which happens to be the finger of Mercury per palmistry conventions.  I love having this double Mercury reminder. I feel an intense affinity with Mercury (and Hermes, his Greek iteration).  With winged cap and shoes, he was the fleet-footed messenger of the gods, fact-gatherer and disseminator of information, travelling between the worlds. Known as a psychopomp, he was able to move between worlds above and below, escorting and rescuing.  He was clever and quick, an inventor, creator of musical instruments, a powerful conduit, bringer of sleep and dreams, and yes, sometimes a trickster.  He is a crosser of boundaries; a deliverer of messages from the gods to mortals; and functions as a bridge from the mundane to the sacred.  I like to think I embody some of those archetypal divine energies in my work.  But I’m particularly delighting in the idea of having this ring as a touchstone as I begin some major writing projects.  I’m hoping Mercury bestows some of his great communication skills.

First is the Soulflowers deck by Lisa Estabrook.

The second deck is Moon Angels created  by Rebekah Erev. 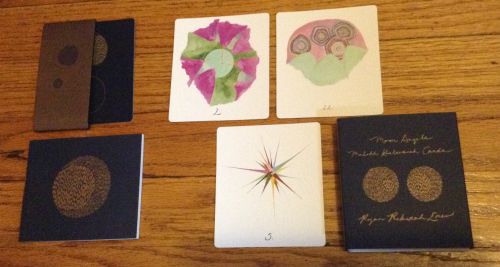 Clearly quite different in their focus and vibe, but I’m looking forward to delving deeper with both of them this summer.

My final delight is the children’s book Jane, the Fox, and Me written by Fanny Britt and illustrated by Isabelle Arsenault.  It’s an award winner that sensitively deals with the pain of being ostracized, and the gift of connection.  I’ve been thinking a lot about this subject, not only as a challenge for the young ones in our world, but also as something we all experience at one time or another.  And how it marks us, and what we carry forward in response. In a time that feels so full of challenges and negativity, I think it’s particularly important to figure out ways we can be kindness wayshowers.  Bonus points to the book because it has a fox in it, and I’m suddenly crazy in love with foxes as well. 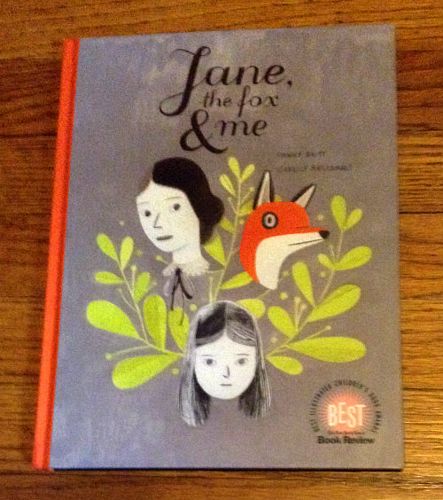 So there you have it – three delights from my world.  What about you?  What’s sparking your joy?  Have a talisman that inspires you?  Have any big projects planned for this season?  Have a favorite tarot or oracle deck you’re exploring?  Read any good kid’s books lately?  Do tell – you know I love to hear.