You are here: Home » Toadstools and Spiraling Solar Systems 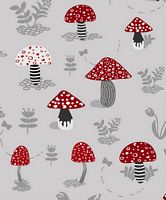 It’s Friday and I’m flinging open the door and inviting you in for a Scattered Life Collective peek into my week.

out the window:  It’s getting dark and cloudy and I think it’s going to start to rain soon.  With a dew point of 72 I don’t know how the clouds are holding back any moisture – we’re already swimming in it.  I heard a news blurb that Chicago is experiencing a little bumper crop of mushrooms and fungi popping up all over due to our excessively moist summer.  I’ve been keeping my eyes peeled for any fairy circles popping up in the yard, but so far no luck.  While I’ve never seen a white-spotted red-topped Amanita mushroom either, I still hold hope for that as well. 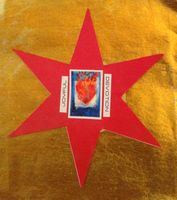 reading:  It’s a mystery to me how this came home with me despite my vow that I’m not bringing another book into this house until I’ve made a significant dent in the piles already waiting for my attention.  But Map Art Lab by Jill K Berry and Linda McNeilly was pretty insistent.  I’m a useless fool when it comes to maps, and there are some fun projects in here to explore.  I know my friend TL understands as she shares my passion.

watching:  peaceful little animation of part of the metta prayer

favorite word of the week:  Kintsugi – Japanese, meaning golden joinery.  The art of fixing broken pottery with lacquer resin mixed with powdered gold, silver, or platinum.  As a philosophy it speaks to breakage and repair becoming part of the history of an object, rather than something to disguise.  Cynthia Lee totally gets credit for bringing this fabulous treasure of a word into my awareness, and you may want to read her guest post about it here.

project I’m loving to support:  Flowers for Dreams.  I’m crazy in love with this idea.  Sustainably-grown local flowers delivered by bicycle!  Stuff like this simply makes my heart burst with happiness – smart people doing good things and it’s all wrapped in love.  More of that please!

on the wish list:  this makes me smile.  Who doesn’t want a pouch that labels you as “thoughtful as hell” made by a company called Social Preparedness?

So there you have it – a peek into the spiraling solar system at the point known as WeberWorld.  What’s been happening in your location?  Do you have red-topped mushrooms where you live?  Any cracks that need some gold-infused repair?  A project that needs mapping or a devotion that needs celebrating?  Do tell – you know I love to hear.