You are here: Home » Venus Votary

I love Fridays as they belong to Venus, and I am most definitely a devotee of Venus.  Or perhaps I should call myself a votary, meaning devoted follower or admirer.  Yes, Venus Votary it is.

I find Venus such an interesting planet, and goddess, and archetype, and she’s been particularly on my mind of late.

As a planet she’s been retrograde since July 25 and will remain so for a few more days until she stations direct on September 6.  You often hear about things you shouldn’t do when Venus is regrade – making major new commitments to things involving love or beauty might result in a change of heart when Venus starts moving forward again.  But rather than focusing on what you shouldn’t do, I like considering what opportunities are encouraged. Astrologer Jessica Shepherd offers just such a list here and you still have a few days left to play in these energies.

Something else I find utterly fascinating about Venus as a planet is that she shifts from appearing as an evening star to a morning star approximately every two hundred and sixty three days.  It’s such a powerful reminder of transformation.  And the switch happened recently as well.

In mid August she transitioned out of our evening sky into our morning sky.  For a couple of weeks she appears to disappear (often considered to be her journey through the underworld), but now once again she’s visible climbing above the eastern horizon before sunrise.

Speaking of the sky, there’s another atmospheric phenomenon called the Belt of Venus, which is the rosy colored arc visible above the horizon during sunrise or sunset.  You can read more and see fabulous photos here.

Astrologically, Venus is often thought of as both your love nature and your artistic inclinations, with the chart sign that it’s in describing the type of love energy you carry and the house describing the areas you will most clearly express this energy.  Toss in the fact that you may be a morning star Venus (I am) or an evening star and that adds another layer to consider.

Returning to looking at Venus as a goddess archetype, she’s all above love and beauty.  We tend to think about these things in terms of physical appearance, and although that’s certainly an aspect, I’d caution the understanding that Venus is not all outward fluff.  The real deep engagement is to see what you truly value, and celebrate that.  When you’re true to who you authentically are and broadcasting that beautiful soul energy undiluted it’s a very powerful thing.  And something to celebrate both in ourselves and others.

There are many symbols associated with Venus, but since I’ve mentioned the Venus Belt sky phenomenon, it seems only right to mention the belt of the Goddess Venus, known in her other guise as Aphrodite.  Aphrodite’s girdle was made of finely wrought gold with magic woven into it, and had the power to inspire irresistible passion.  So powerful was its magic that Hera, queen of the gods, and herself goddess of marriage, occasionally borrowed the girdle to reunite quarreling spouses and inspire bridal contests.

The swan is a bird sacred to Venus, and I particularly love this image from the Moon Oracle deck, one of my favorite decks to work with. 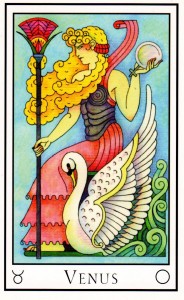 It’s one of the items I’ve kept on my Venus altar which I created for this retrograde period.  Also included on the altar is this fabulous Greek stamp 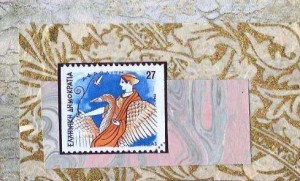 and my swan feather talisman

The goddess of love and beauty always invites us to pay attention to the loveliness around us and invites us to put on our dancing shoes and participate in sprinkling bits of beauty with every spin and twirl.  And isn’t it perfect that there’s an orchid named Venus slippers? 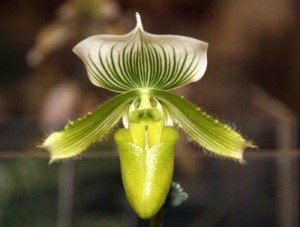 What beauty are you paying attention to today?  What are you loving?  How are you celebrating this day under the auspices of Venus?  Do tell – you know I love to hear.