You are here: Home » What’s It All About?

What’s It All About?

No doubt we’ve all had the experience where we understand something important has happened, and yet we know it will take time and reflection to figure out exactly what it is.  I feel that way about this year.

I’ve sort of been hoping that some version of Reverb (miss your wise presence Kat McNally!), or some set of reflection questions would appear this month that might help me sort through and tease out greater meaning or assist in clarifying or contextualizing,  I like doing such reflections in a group context which is why blogging challenges appeal to me – not only am I curious about what others are thinking, but the fact that a group is focusing together amplifies the energy and thus makes tapping into it easier and the possibility of diving deeply easier as well. But alas, no set of tantalizing questions has made itself known to me.  So I think I’ll be forced to cobble together something myself, and simply trust that no matter what the starting point is, I’ll find my way in and perhaps discover something interesting.  Susannah Conway has put together her annual December Reflections prompts that many people use as daily photo prompts, and recently I discovered the Proust Questionnaire from the 1880s, which seemed dazzlingly unfamiliar to me until I later realized Vanity Fair has done their own version interviewing various folks beginning in the 1990s.  And, I do in fact, have my own personal traditions of reflecting on the year, so I can tap into and tweak those things as well. So I’m think I’ll begin my dive, with the intention of blogging most days in December, using some form of these questions at least to start with, and see where I’m inspired to go.

Susannah Conway’s prompt for December 1 is red, and I’ll start there. 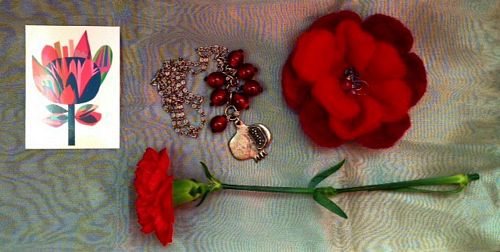 When I think about this year, nothing reflects red better than my Persephone-honoring pomegranate necklace.   Earlier this autumn I wrote about deep diving with Persephone and exploring the archetypal energy of Queen of the Underworld. I’ve worn the necklace frequently as a touchstone in this adventure.  I’m crazy about those vintage Japanese beads that manage somehow to magically glow from within, just as pomegranate seeds seem to me to do.

The felt flower was made for me this year by a beloved friend and it, too, has deep significance regarding my soul’s journey, and in particular spiritual work which unfolded more deeply this year. Inside the flower I have a favorite set of earrings – of rubies and turquoise, both of which hold significance for me in this journey as well.

The printed flower is a Tattly. I’ve been wearing temporary tattoos all year. I started primarily because of immersion into some sacred geometric studies I’ve undertaken. I’ve always found it incredibly helpful to have touchstones and talismans when doing sacred work and the temp tats have worked for me, allowing me to change them up as I’ve explore different forms.  I enjoyed working with them so much, now they’ve become a natural part of my adornment and when I’m not wearing sacred geometry shapes, I’m wearing flowers.

At the start of the year I set an ambitious goal of reading 100 books.  Although I haven’t counted yet, and there’s still time to power through a number more, there’s no doubt I fell way short of that goal.  But a most curious pattern appeared in the books I did read – two distinct themes.  Many many many of them were “mythological” in nature, exploring the lives of various gods and goddesses, and many others were about flowers.   None of these books were actually on the list of those I was planning on reading, and so it’s interesting to see how I was pulled in those directions.

So as I consider what 2017 was about for me I will definitely be holding it as a year of Pantheons and Posies.

What about you? Are you feeling the call to try and make sense of this year – and does it feel different than the ways you might have chosen to do that in the past? What have you noticed about themes in your year?  Did unexpected things show up in a big way?  What red things are you noticing?  Do tell – you know I love to hear.