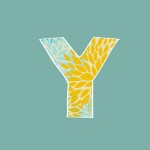 I am oddly fascinated by yodeling.

Weird I know. But you can’t help things like that.  They appear on your radar and boom, something connects and there you are.  Helplessly mesmerized.

It started with a dream.

Well, the dream started with something else, so let’s back up a bit.

Back in the late 90s there was a computer game call Grim Fandango.  It was an amusing noir-ish adventure game about the land of the dead populated by calaveras characters – Day of the Dead skulls.  The art was fabulous and fascinating – cool cigarette-shaped skull-headed characters on travel adventures to make it to their destination to the ninth underworld.   You can read more about it here where you get to see a picture of one of the characters, or you can view a trailer clip here.

One night my dreams were populated by Grim Fandango-ish characters.  It started out with dramatic fandango music and the characters were all gathering on the outskirts of a ballroom floor.  I had a sense there was going to be a dance completion and the excitement was building.  And then it began.   Two characters, one male and one female entered from opposite sides of the stage, do some wonderfully complicated utterly amazing dance steps across the stage to meet in the middle.  There’s a dramatic pause… and then they begin yodeling.  It was hilarious.  And perfect.  And it set the stage for my yodeling fascination.  Because this had to be seen to be appreciated.  This wasn’t cowboy yodeling or Swiss mountain yodeling but uniquely Calaveras-style yodeling.

Which begs the question, why aren’t there really cool new yodel styles and fabulous yodelers?  Seriously.  Wouldn’t that be fun?  Now that I’ve experienced what it could be like (or rather is, via my dreams), old-style yodeling is pale by comparison.  And so I’m on the lookout for new stuff.

Alas, I haven’t been successful in finding anything.  Occasionally someone young and unexpected breaks out into a yodel, but it’s always cowboy-ish which is somewhat disappointing.

I’ve had to settle for this one Jimmy Fallon clip.

So in honor of my dream yodeling experience, here’s today’s index card for the ICAD challenge. 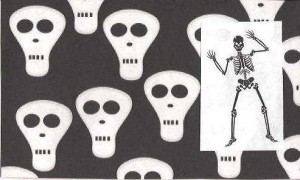 And because it’s Tuesday and that means the Artysville Glue It Tuesday salon has convened, here’s a journal page. 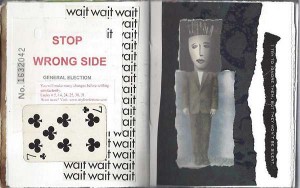 So what about you?  Who is appearing in your dreams? Ever got excited about a musical genre (or anything) because of a hedz up from your dreams?   Would we count you as leaning more towards the cowboy camp of yodeling or the Swiss mountain callers?  Love film noir?  Dia de los Muertos?   Do tell – you know I love to hear.