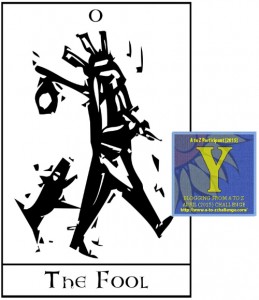 Y is for yarrow.

Yarrow is the common name for Achillea millefolium, a hardy and hard-working plant with a centuries-long reputation for both healing and protection.  It’s named after Achilles based on the legend that his mother dipped him in the River Styx which offered powers of invulnerability.  Which kept him protected except for the one place she held on to him while she dipped him – his heel.

Considered by some a common weed to be relentlessly eradicated, others, myself included, love this beautiful flower.  It’s a member of the asteraceae family which includes asters, daisies, and sunflowers as well.

It comes in many colors from creams and whites to golden yellows to pink, and has charming feathery leaves.  I’m partial to the pink varieties.  Bees love it as well. 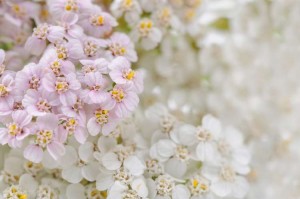 The plant itself has a long history of herbal/medical uses, including wound healing, regulating blood flow, treating colds, flu, fevers, hypertension, cystitis.  It’s been used magically as well to induce dreams of one’s forthcoming love, and used in wedding bouquets and spells as it’s said to keep love strong for seven years.  Interestingly, in some floriography compendiums  defining the language of flowers it is also known as a cure for a broken heart.

Yarrow has been important to the Chinese as well.  Said to have grown on the grave of Confucius, yarrow stalks were also used to cast the hexagrams when one consulted the I Ching.

Used another way for divination, yarrow was once sewn into a little pouch and placed under the pillow with the hopes of bringing dreams of one’s future husband.  The charming little spell required these words to be recited:

“Thou pretty herb of Venus tree

Thy true name be Yarrow

Now who my bosom friend must be

Pray tell thou me tomorrow.”

I love working with herbs and one of my favorite things is to make little dream pillows. I often include a pinch of yarrow.  Whenever I make a pillow I think about poet and ethnobotanist Dale Pendell said:

The essential oil of yarrow is a delightfully surprising blue color and smells herbaceous and dry.

Flower essences, made from the vibration essence of the flower rather than actual flower parts, return to the idea of protection.  White yarrow is most often used for general protection in the sense of strengthening one’s own auric field. Pink is often used to help one operate in the world with an open heart without feeling vulnerable. And yellow can be helpful in softening those who feel they have to work very hard at protecting themselves as they navigate in the world.  It’s also helpful in communication, inviting one to show up as one’s true balanced self.

So you see, yarrow really is one of nature’s beauties with lots of gifts to share.  And somehow I think our beloved friend Fool would find a way to connect with yarrow as well.  I like to imagine a stem or two poking out of his pack on the ready for any inspired healing or divination.  And it makes me smile to think that perhaps a bee will be following along behind as well.

What do you think?  Is yarrow a flower you know and love?  Ever made or used a dream pillow?  Consulted the I Ching?  Find floriography fascinating?  Do tell – you know I love to hear.